With the tide turned against the Dead, Peter and the remaining community on Wranglestone prepare to leave for town, where the comforts of the world before await them. Could this be the home that finally brings both safety and unity for all?

Cooper isn't so sure. He harbours feelings from that terrible night on the lake and worse, a secret ... codename, Timberdark.

With Cooper's new found connection to the Dead, Peter's suspicions about what he might do next grow. Faced with losing the boy he loves, Peter must uncover the truth about the mysterious Timberdark before their future together and the world around them is placed in danger. 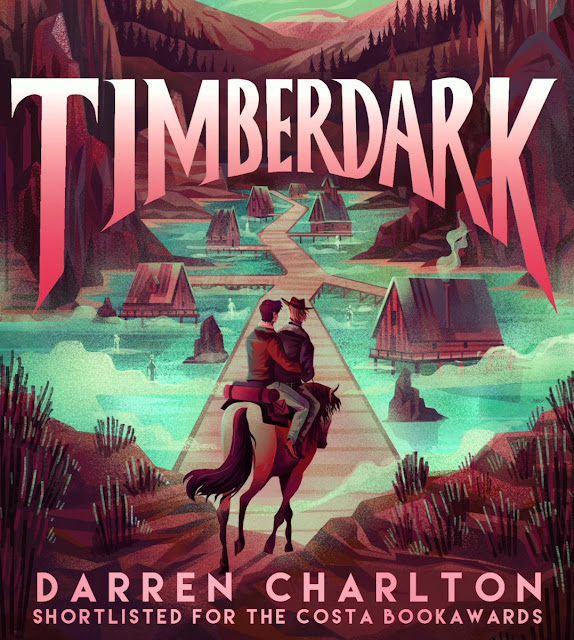 It's a gay zombie Western, about love and how painful it is to love someone and to realise that they no longer love you the same way, and how hard it is to see that canyon form and fill with silence. This really hit a nerve with me, and was at times almost painful to read. The emotional resonance is just so overwhelmingly powerful.

First of all, for anyone not familiar with book one in this series, Wranglestone, yes it is a gay zombie Western. In a post-apocalyptic world, human survivors eke out an existence on the islands of a lake on a nature reserve, protected from the zombies stalking the land by the water, except when it ices over in winter. In this bleak, harsh existence, Peter and Cooper find love with each other. Cooper, with his Stetson and his faded jeans and his beloved horse is the quintessential cowboy, and I loved how making him gay did so much to subvert traditional tropes and open up new possibilities for storytelling.

Actually, if you aren't familiar with Wranglestone, you really need to read that first. Timberdark picks up where it left off, and won't make an awful lot of sense as a starting point.

For the first part of the book, the love between Peter and Cooper is pure and beautiful and an absolute joy to watch as they take comfort in each other's presence. There's no sexual content, but beautifully described kisses and hand-holding and it is just the sweetest, purest romance. The ways in which they are there for each other warms the heart.

Then they leave their settled-ish existence, moving into a new town in the hopes that humanity and civilisation might actually be rebuilding itself. This is where the problems really start. The descriptions of love falling apart, of being in love with someone but unable to reach out to them, unable to talk to them and tell them how you feel, or of knowing that you are losing them and being powerless to do anything other than wish they'd open up to you, talk to you, reach out to where you are lying in the darkness thinking about them and aching with every last piece of your heart, they elevate this book from a fantastic horror to someone altogether different and very special. It's mirrored, in a way, with Peter's friendship with Becky, where he just can't bring himself to reach out and talk to her and watches their friendship fade away in silence.

Ouch! I'm glad I've never had to go through anything like that. 😑

There's so much more to this book than relationship trauma though. There's a really exciting storyline once they reach the town that left me wondering what just about everybody is up to, with plots and mysteries and secrets that are thrilling and captivating. It really left me guessing about what was really going on, and once truths are revealed it's frantic with action.

The Western style is something I really loved about this too, it's just blended so well with the rest of the setup, giving it a real charm of its own.

The horror elements are absolutely on point. The herds of zombie have lost some of their threat, though there is one nail-biting sequence with them, but there's a new and totally terrifying killer in there who really chilled me!

The whole thing finishes with a powerful message about our very humanity, but spoilers!

All in all, beautifully done. Powerful, emotional, with one of the most real, most beautiful and most raw romances I've come across. The fact that it is a gay romance is just another win for diverse representation really.

Timberdark, you broke my heart and destroyed my emotions, and I'm still giving you five stars.

Timberdark by Darren Charlton is published on 1st September by Little Tiger Group.