The city of dreaming spires.

It is the centre of all knowledge and progress in the world.

And at its centre is Babel, the Royal Institute of Translation. The tower from which all the power of the Empire flows.

Orphaned in Canton and brought to England by a mysterious guardian, Babel seemed like paradise to Robin Swift.

Until it became a prison…

But can a student stand against an empire? 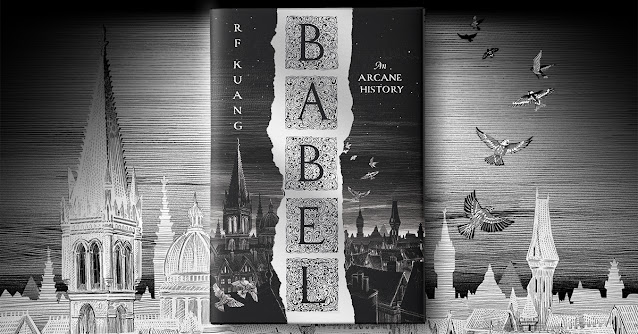 When I was only a little way into it, a friend asked how I was finding it and I told her it was "Better than it has any right to be." At that point it was an alternate history/fantasy book all about etymology and linguistics, spending most of its time talking about the intricacies of translation between a bewildering array of languages, and very little else. And yet, somehow, I was completely gripped by it! There is a magic in words, and R. F. Kuang absolutely knows how to wield that magic. Her descriptions of London and Oxford are absolutely beautiful and evocative, bringing them immediately to life.

This is a novel that grows and shifts before us on the page. Yes, it is about the power and magic of words, the difficulties and joys of translating them and how their meanings shift and change from language to language and across time, but it is about so much more than that.

It is a book about an alternate England, where silver bars are engraved with match-pairs, words in two different languages that mean the same thing, but have more complex and different meanings too. That tension between the different translations creates a magical effect, that can be used for anything from making trains run faster by embedding silver in the tracks to keeping food warm on the dining table in dishes with silver in their bases. Creating this magic takes a team of linguistic experts, centred in the tower called Babel in Oxford University. Because of the in depth knowledge of the languages used, many of the scholars and students in this institute are foreign-born, brought to England and educated here by guardians in preparation for a career at Babel.

We follow Robin, a young boy from Canton brought to England after the death of his family, educated in Hereford by Professor Lovell and then sent up to Oxford, where he meets and befriends the three other members of his cohort, Ramy, a lively young man from Calcutta, Victoire, a black French girl, and Lottie, a little English rose struggling to find her father's acceptance. Together they navigate their studies and the difficulties of finding acceptance in 1830s Oxford, a place where none of them fit it.

Babel gives us a really powerful perspective on British imperialism and colonialism, the arrogance of the oppressors and their complete disregard for the rest of the world if it comes between them and their power and their profit. It links this to class warfare too, showing why the English working class have so much more in common with the foreign victims of our Empire than we have ever had with our own nobility and merchant classes. It pulls in diverse topics like slavery and emancipation, feminism and suffrage, and the strong links between these movements of resistance.

But most powerfully it shows us the immigrant view of imperial England, the idea that people were plucked from their homes in Canton or Calcutta, brought to England and expected to be grateful. People who were given opportunities, limited opportunities with firm conditions, under scrutiny from peers who only ever saw them as their inferiors, for as long as they were useful resources to our empire and its endeavours, and they were expected not only to go along with whatever was asked of them, but to be grateful for it. And in one character we see the familiar figure of the white woman, who has fought her way into a limited level of acceptance within the status quo, and will then do whatever she can to protect that self same society from any disruptive forces.  There are so many stories here, most of them tragic, too many of them still very familiar today.

Babel is a quite extraordinary novel.

Babel by R.F. Kuang is published on 1st September by Harper Voyager.