Look. Madeline. You've lost your soul. You've lost your freedom. You've lost a bit of your sister. What else could go wrong?
Catlin and Madeline are extraordinary sisters, living extraordinary lives - in a place that seems entirely ordinary, but which in fact seethes with secrets, both sacred and sinister. Ballyfran is a village where, for centuries, people who are not quite human have gathered. Catlin has already fallen foul of one such creature - a dark, vicious predator who almost killed her - and only Madeline giving up a part of her own soul was able to bring Catlin back from the brink of death.
Now, the girls are making their strange new lives: Catlin, haunted by what happened to her, is isolated and bereft; Madeline is learning ancient magics under the tutelage of local wise woman Mamo. Learning that magic isn't mindfulness and hats. It's work - hard work. And Madeline knows she has to keep watch. On her sister. On the things that happen. Notice things before they start to happen. And before long, they do ... 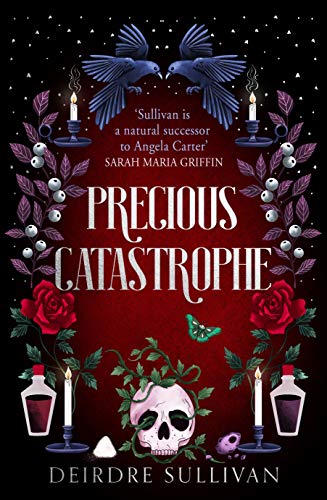 Perfectly Preventable Deaths is one of my absolute favourite YA novel, so I was very excited to hear there was a sequel coming out.
Precious Catastrophe picks up right where book one ends, and it is pretty necessary to read the first one first. One reason I was thrilled at news of a sequel is that book one left quite a few open questions. What happened to Catlin and Maddy's dad? Did Brian have a part to play in everything that happened? We saw two figures at one point and it was never clear exactly who they were.
Precious Catastrophe goes a long way towards answering these questions. Not every mystery is cleared up, and I'm really hoping for a third book, but I definitely finished this one with fewer unresolved queries and doubts.
After the events of book one, Catlin is recovering from her abuse and murder at the hands of Lon, while Maddy is working for Mamo, learning how to be a witch. The point of view switches between the two sisters, as we see how they cope with their changes of circumstance and their changing relationship with each other. The growing tension between the twins, no longer living together, really drives a lot of the tension in the book. I felt like things would be so much simpler for them if they just worked together, though of course that wouldn't make for such an exciting book.
Like with Perfectly Preventable Deaths, one of the key elements of Precious Catastrophe is the tension between Catholicism and Pagan beliefs. This feels so particular to Ireland that it's hard to imagine the book being set anywhere else, but in a remote, cut-off Galway village it has found the perfect setting. It's not just the tension though, these aren't necessarily competing beliefs facing off against each other, the parish priest against the witch. The true beauty and magic of this is found in where these belief systems intertwine, flow into each other, feed off each other. It's in the worshipping of ancient bog statues in the church, in saying prayers and not really knowing who is answering them, in their shared blood rituals and offerings. I absolutely loved how well this was handled, and it gave the book such a deep and mysterious darkness.
I loved how well it picked up elements of book one, without retracing old ground, telling a new and powerful story with a mixture of new and familiar parts. I loved the queer elements, and how sensitively they were handled, and I loved the little hints at the wider mysteries of this village. There's clearly so much more there to explore, and I really hope Deirdre Sullivan does that.
Powerful, dark, haunting and mysterious. Precious Catastrophe is YA horror at its finest.
🌕🌕🌕🌕🌕
Precious Catastrophe by Deirdre Sullivan is out now, published by Bonnier Books UK.
I was given a review copy via Netgalley in return for an honest review.
Labels: horror review YA