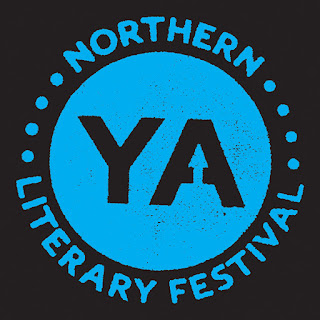 The final panel at the Northern YA Literary Festival was Holly Black being interviewed by Samantha Shannon. I was starting to flag by this point in the day, so my notes aren't quite as structured as they were in earlier panels, so I'm largely abandoning the questions and answers format here, to bring you some of Holly's thoughts and comments.

Now I haven't read any of Holly's books since The Spiderwick Chronicles, but I'll be starting the first of her new trilogy, the Cruel Prince, very soon and I'm really looking forward to it. 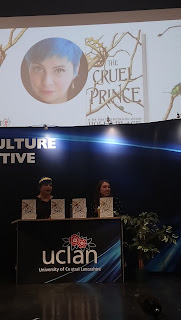 SS - When did you become interested in fairies?
HB - There's a big illustrated book of fairies by Brian Froud. My mom was a painter and she had it. It freaked me out and drew me back to it. There was this ecosystem of creatures that don't sit well with mortals.

SS - Did you believe?
HB - I believed in fairies. Mom set up a garden fairy scavenger hunt. According to her I grew up in a haunted house. She told me "Never astral project." It left me terrified and believing.

HB - I've written a lot of fairy books. For The Cruel Prince I was looking for something new. I had never written a book entirely set in fairy. The Cruel Prince is a reverse changling story, a girl grown up in fairy, raised by the murderer of her parents, as a parent figure. She's living under permanent stress.

HB - It was interesting to use The Cruel Prince to connect two disparate courts from my other series with an overall court.

HB - I'm always interested in human protagonists. I'm drawn to humans who meet fairyland without being touched by it.

HB - Gender doesn't matter as much in fairy. Queens rule. Positions are open to humans, though it's tough being a human woman in fairy.

SS - Can fairies help being cruel?
HB - They're not human. They've never been human, unlike ghosts, vampires and werewolves. They are immortal beings and that is really interesting to me. They have a different honour system. It just feels cruel to a human.

SS - Favourite heir?
HB - I enjoy Prince Cardan. He is the worst!

SS - Will you always come back to fairy?
HB - It does seem that way, doesn't it? Probably, but I have other stories.

HB - Wicked King is finished. It features a wedding, the undersea and merfolk.
HB - Queen of Nothing features a funeral.

Covers
HB - It's lovely to have some say but often you realise you are wrong. My first idea for The Cruel Prince was a stone throne, underground with roots growing through. It didn't work. They came back with this one. 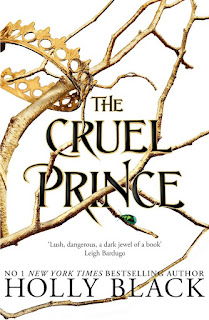 HB - It wasn't necessarily easy to write The Cruel Prince but I knew a lot about it. I build from mood and feeling. It's really hard to build a plot on a feeling.
SS - Character is the engine of my world building. I need a character to navigate through it.

Names
HB - I take names from fairytales I like. I take a name I like and prefix or suffix it. I also use baby name sites like Nameberry, which might have been taken over by writers.
HB - I( like 4 letter gender ambiguous names for protaganists - Jude.
HB - I play around and change names until they feel right.

Collaboration
A buddy who is contractually obligated. It makes it easier in some ways. It is interesting when you have different approaches to sticking to outlines or world building.


Holly then gave us brilliant retellings us two of her favourite fairy stories and fairytales. The first one was about a guy who built a house for his wife on a stretch of land that crossed a fairy path. The second was a French story called The White Cat. I couldn't do her retellings justice here I'm afraid.

HB - What I love is the space on the borders, having one foot in each world. Being on the border of fairy. Teenagers are like this in a way. They are at the border between being a child and an adult, constantly shifting and changing, in flux. Is there a way to have both worlds?


Holly's conversation with Samantha Shannon was absolutely brilliant. A wonderful ending to a fantastic festival. Her retelling of The White Cat was just hilarious.