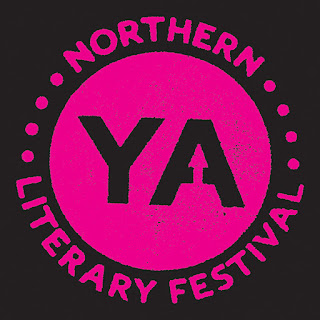 Welcome to the second of my Northern YA Literary Festival round up posts.

The second panel of the day looked at Feminism in YA. Katherine Webber hosted it, with Matt Killeen, Lauren James and Annabel Pitcher.

Before the panel started, Lauren Steven was introduced to the stage (by me!) to talk briefly about her own brilliant feminist novel, The Exact Opposite of Okay. (review here). She told a story about a guy she knew in her early twenties who became rather scarily obsessed with her, and ended up making a Monopoly board where every square was a picture of her face and all the Community Chest cards were trivia questions about her! She concluded with the statement that now is a good time to be having conversations like this. 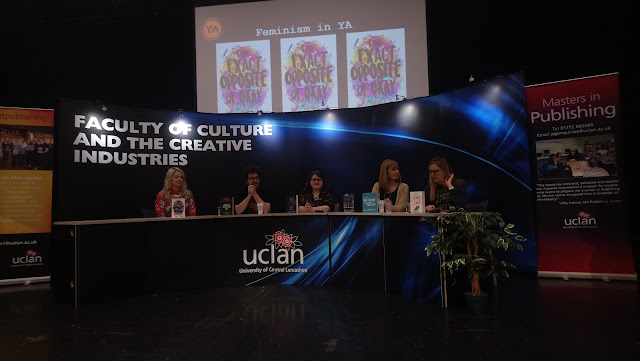 Katherine Webber kicked things off by asking the panel to define feminism.

AP - The advocacy of female rights on the grounds that people are equal.
LJ - Female voices are heard equally.
MK - As well as the socio-economic and political equality, that is the dictionary definition, it's about bringing down the patriarchy! This is important for our self-preservation. It's a kind of Stockholm Syndrome!
KW - emphasised that there's no way to do feminism wrong.
AP - It's about giving people the freedom to do what they like, male or female.

LJ -  It's easy to assume we live in an equal society. We're still living in a sexist society.
KW - Need to raise up other voices. It's important to be open to listening.
MK - Speak up. Let publishers know when attitudes aren't acceptable.

What makes a book feminist?

LJ - A strong female character should be one who is strong because they are female. That makes it feminist.
AP - Her new book has a male protaganist, who has no outlet for his emotions. If we free women from stereotypes we also free men. She is frustrated with being told how easy boys are, and this can start from birth. Boys are praised for being strong and brave.
MK - More books need to highlight toxic masculinity.

Where do your ideas come from?

MK - Idea came naturally. Lived in a patriarchal household, and didn't subscribe to that. Had powerful sister figures. Studied film at university and was challenged to shake his writing up by writing female lead characters.
LJ - Studied chemistry and physics at university. From sixth form there were a minority of girls and she felt like an imposter.
AP - Writes from what interests her at the time, and is a mother of sons. The idea for Archie Maxwell came from the fact that children are unaware of most of their parents' lives, their secrets and their pasts.
KW - Wing Jones came from the realisation that someone you idolise isn't perfect. This is something every teenager experiences.
LJ - quoted Alice Oseman, work out what each character's secret it.
LJ - Comes up with the plot first, then finds the characters she needs to fit into it, their weaknesses and their flaws.
MK - Relationship with parents is critical to your personality and identity. It's important to explain where your character's skills come from - the montage training scene.
KW - Teenagers start to protect their parents, they step up, instead of going to them for help.
LJ - There's the dead parent trope, you can try to get teenagers away from their parents but things still relate back to the parents.
LJ - Talked about the importance of Percy Weasley's character arc, as someone who takes a very different view to their parents but eventually comes back to their way of thinking.
KW - It is important to ask of smaller characters, can they be female instead of male?

MK - "How to be a woman" by Caitlin Moran. The way to tell if something is sexist is to ask "Would a bloke put up with it?"
LJ - YA is female dominated but not necessarily equal, pay discrepency. There are so many strong women in publishing. Those are her idols.
AP - Caitlin Moran. Ali Smith's The Accidental. It's a timeless, almost genderless, exploration of humanity.
KW - Alanna books by Tamora Pierce. A girl who wants to be a knight, not a sorceress, so pretends to be her brother but still deals with feminine issues like periods and birth control.

KW - If you want something, it's okay to ask for it!
AP - Women are praised for being polite. It's okay to break out of that.

Who is your favourite Disney Princess?


This was a brilliant panel. All of the authors were really interesting, and there was a great mix of discussion about feminism and writing tips. 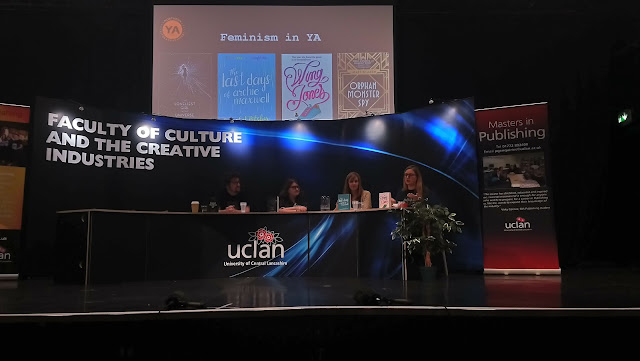