There was a lot of excitement in the Northern Book Bloggers chat when an event listing for a launch party for Anna Day's novel, The Fandom, appeared on the Waterstones Newcastle website, followed by a bit of concern and confusion when it abruptly disappeared again, and disappointment when we found out that it was going to be a private, invitation only launch, (which is pretty standard practice I believe).

So I was really excited to then get an invitation to the party, and very happy to find out that said invitation was to be extended to the rest of the Northern Book Bloggers. In the end six of us made it out to the party. From left to right we have me, Aimee, Rebecca, Cora, Anna, Steph and Charlotte. 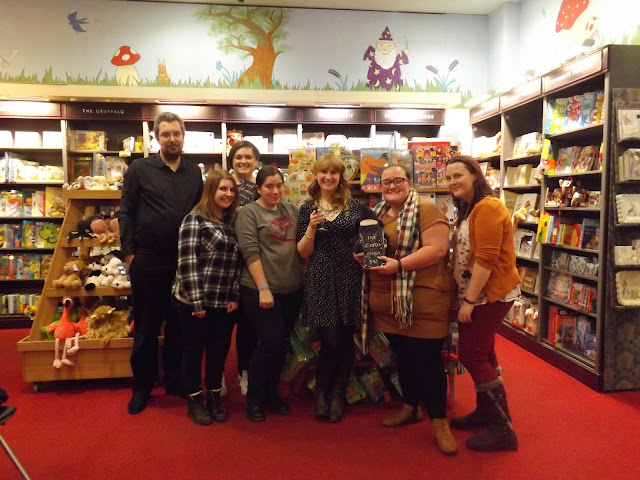 The basement of the best bookshop in the North was pretty full by the time I arrived, late, damp and flustered. There was an excellent turn out for Anna Day's launch. A glass of red wine and some friendly faces soon helped me to de-stress.

Rebecca had made some Taken Moons candles based on The Fandom, called We're Not In Cosplay Anymore, and presented Anna with a pair of them. I was lucky enough to take one home with me too, and honestly they smell amazing! The scent is fresh cut grass and wildflowers, and really evoke the feeling of the Pastures from the book. 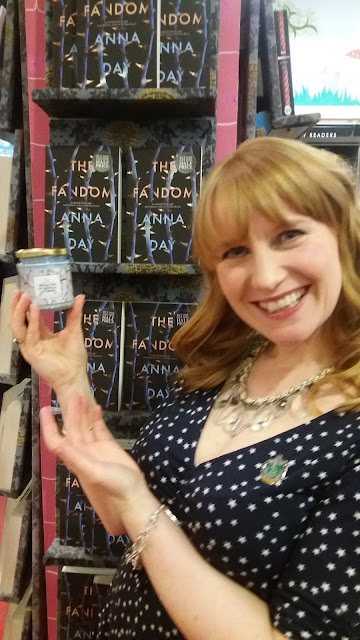 Here's Anna modelling one of her new candles, in front of a wall of her books, and one of the candles, which will be available from the Taken Moons store at the end of the month. 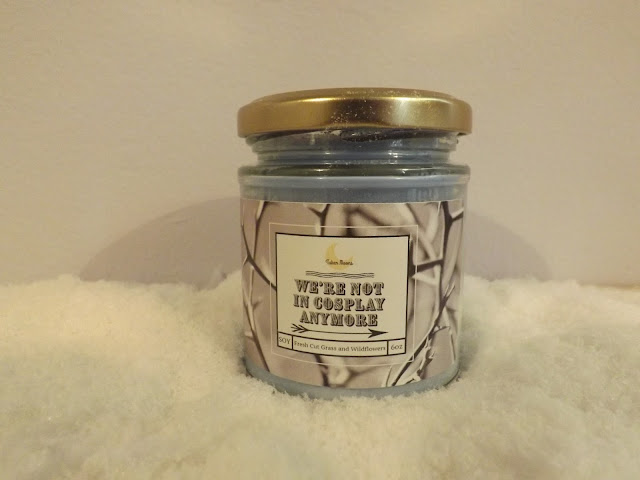 Anna Day was a lovely host, taking time to sign loads of copies of her book, chatting to people, posing for photographs, and it was really good fun to have a proper party in the Waterstones Newcastle basement, somewhere I often hang out but where I don't usually get given quite so much wine!

There were other writers there, and I got to catch up with Shanna Hughes again, and to meet Dan Smith and Chris Callaghan. Dan walking up to me and saying "Hi, you must be Liam" was quite a highlight since I just devoured his new book last week!

Another absolute highlight was when Anna's mother introduced herself to me, saying she recognised me from the picture on my blog! I spent ages talking to her and to Anna's father too.

It was my first book launch party, and I thoroughly enjoyed it. It's so lovely to socialise with my fellow northern bloggers, and to actually be able to talk to authors for longer than you can in a signing queue.

Anna has another event already lined up at Waterstones Newcastle for Friday 26th January, with the lovely Dan Smith. Tickets are available here and I'm really looking forward to that one too. I believe she's also visiting other bookstores around the region so there are plenty of opportunities to catch up with this exciting new author.

It was a fantastic night, and the start of a busy calendar of book events for me, building up to the first Northern YA Literary Festival in March, and hopefully YALC in July.
Labels: Events YA