Hello! I've just put my Christmas tree up and decorated it and it's finally starting to feel a bit more Christmas-like in here.

Today I'm going to share with you one of my favourite Christmas traditions, baking. I've been baking at Christmas for years now. Most of the year I'd do very little, maybe the occasional batch of scones, a birthday cake or two. Then at Christmas I'd do mince pies and sausage rolls. This year I've been baking pretty much year round, but as I'm making Christmas dinner for my family I've decided to go all out on the Christmas baking, with a few new things for me. 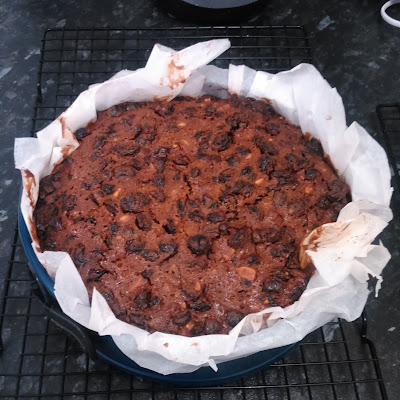 The first step for each of them has been essentially the same. A massive amount of different types of dried fruit and peel go into a big mixing bowl, with a bit of alcohol, and it all sits there overnight. That's a wonderful part of Christmas baking. The smell of the fruit in the alcohol fills the flat and it really does feel like there's a little bit of Christmas in the air. I've had three nights of that now, and I'm getting quite used to it. 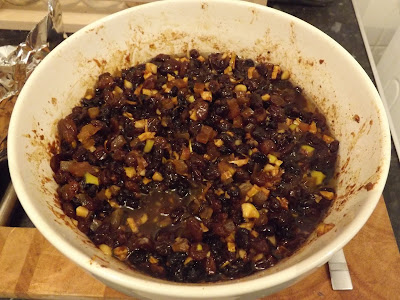 Other than that I've discovered that Christmas baking is sloooooooow. The pudding took eight hours steaming over a pan of water. The cake was in the oven for four hours and the mincemeat took three hours in the oven and then about the same to cool, being stirred the whole time to keep the fat moving around. That's after a night-long preparation. It's not like you have to do anything while this is happening, so it's quite a good excuse for curling up with a good book, or doing the Christmas wrapping paper, but it sure does eat up a lot of your time, especially since I've had to do one at a time.

Once they were finished though, I discovered a new thing to stress about. You see, with the pudding and the cake, I've got no way of knowing if it is any good or a tough, stodgy mess, until Christmas evening when I serve them to my family!

At least I've been able to test out the mincemeat, and it is good! 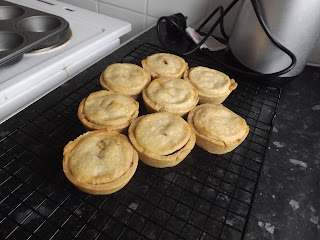 So what about you? Do you like to bake at Christmas? Or do you have anyone who bakes for you? Let me know in the comments or on twitter @notsotweets