Review - Umbrella Mouse to the Rescue by Anna Fargher

Umbrella Mouse to the Rescue by Anna Fargher

Young mouse Pip Hanway is in France as she continues fighting for the French Resistance group Noah's Ark: a secret gang of animals operating beneath the feet of human soldiers, whose aim is to liberate France and secure the victory of the Allies. Determined to reach her ancestral home of the Umbrella Museum in Italy, Pip hopes she can find long-lost family and a home. But as Pip makes the perilous journey through occupied territory, she soon realizes that danger comes from all sides and that the enemy is all around, and she does everything she can to fight for her friends. 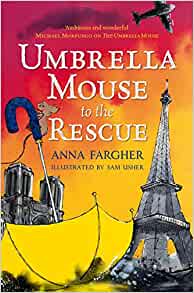 Another thrilling war story, with resistance hunters, daring missions and the liberation of Paris, all told through lovely (and occasionally scary) little creatures. One of the best things about the Umbrella Mouse stories is that they are 'proper' war stories, seeped in that old fashioned war movie style, telling tales of a rebel band operating boldly behind enemy lines and swaying the results of the war. The twist, of course, is that they're animals and none of the humans fighting are aware of the part they play.

I loved the very tangible sense of peril, the emotions, the excitement. This story really ramped up the tension with thoughts of loved ones, in hiding, and in very real risk if the enemy manages to find them.

The characters are brilliant and really make you feel for them and the dilemmas the war has thrown at them. There's so much complexity to them, with fears and concerns, the occasional betrayal, rivalries and alliances. They really come to life very effectively. They feel like three dimensional characters, with all of the flaws and potential of any human antagonist.

The illustrations by Sam Usher are perfectly suited, and it all comes together wonderfully to create a fabulous, thrilling and exciting story.

Umbrella Mouse and Umbrella Mouse to the Rescure are available now from MacMillan. I was given an eproof via Netgalley in return for an honest review.