Henry is the new boy at Halbrook Hall - a crumbling boarding school in the Scottish Highlands. He thinks the rumours of yeti lurking in the misty hills are nothing more than stories. Until one day he gets lost in the forest...

As a young yeti, Tadpole loves living in Shadowspring. But now the precious spring water is disappearing and no one knows why. The situation is serious - surely there's something she can do to help...

When Tadpole accidentally reveals the top-secret location of Shadowspring to Henry, the lost boy she saves, she knows she's in deep trouble. But what if this human actually has the power to help the yeti not harm them? 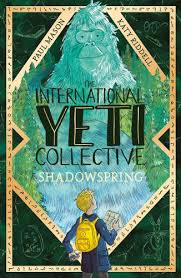 I loved the first International Yeti Collective novel, so I was very excited to get hold of the sequel. It absolutely lived up to the promise of the first book.

Shadowspring focuses on a different group of Yeti, and it's one of my favourites! The Greybeards sett are based on stories of creatures seen in the Scottish Highlands, and they may be something I've looked for myself, though without any success in finding them. Tadpole (She of unripe character) is a young Greybeard yeti at the heart of this story, and she's just a wonderful character. The sett are preparing for the arrival of yetis from around the world, and one of the real strengths of this series is the way it incorporates cryptozoological examples from across the world. They were mentioned, and seen briefly, in the first book and here they play a much larger role. It bodes very well for this as an ongoing series that it's already tapping into so much promising material.

There's also Henry, a human child sent to a boarding school in Scotland. The school sequences are pretty good, establishing Henry and his environment, his new friends and the school bullies, and hinting at some sinister goings on on the school grounds.

Everything really kicks off when Henry and Tadpole inevitably meet, and most of the drama of the novel comes from the tension between their two worlds colliding, and the implications this could have for both of their separate societies. There's a lot in there about acceptance and fear of outsiders, and like the first novel there are some very timely environmental warnings here.

Shadowspring is excellent. A cryptozoological environmental warning, told with humour and warmth. It's also beautifully illustrated by Katy Riddell, who really captures the humour and humanity of the different yetis.

The International Yeti Collective is published by Little Tiger Press and is available now. I was given an eproof in return for an honest review.