Ash and the rest of the Frostheart's brave crew have finally arrived at the majestic stronghold of Aurora - and Ash's mind is blown.
It's an extraordinary place - unlike anything he's ever seen - and he can't wait to solve the next clue that will lead him to his parents.
But it's quickly clear that even Aurora isn't safe for Song Weavers. A fanatical Pathfinder captain has turned the city against Ash and his kind - and it's not long before the Frostheart has to make another break for freedom.
But when a vicious Wraith attack leaves Ash, Lunah, Rook and Tobu stranded on the ice, they will have to use all their strength and cunning to reach safety. But what they find is even more incredible... 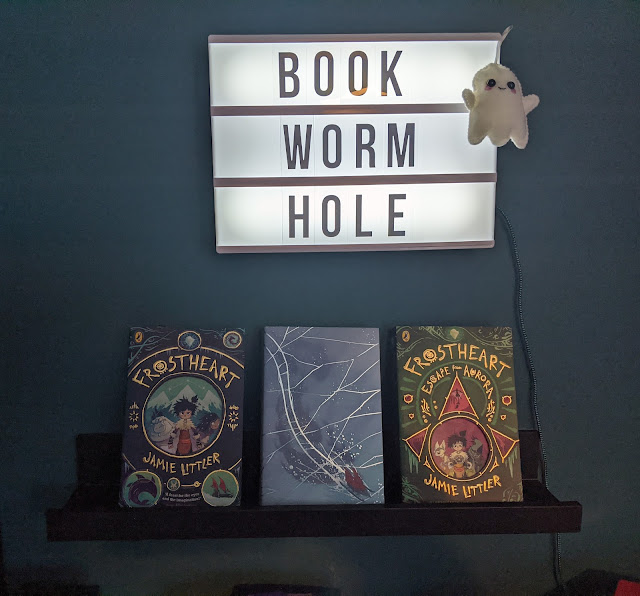 The further adventures of the Frostheart! How I'd eagerly awaited this novel, and it was so, so good when I finally got it!

Jamie Littler has created such a fascinating fantasy world, and I absolutely loved getting to explore more of it, with the bold, fantastic crew.

All of the ship captains coming together in Aurora had a distinctive Matrix 2 vibe, with all of these ships gathering to discuss a way forward. Aurora itself was mysterious and magnificent, with just enough of a scary edge to keep the tension high. Then the dangerous trek through the forest was a welcome sight of environments other than the seas of snow and ice, and I felt like it really opened the world up and gave it new complexities I hadn't seen before.

The voyage itself felt suitably dangerous and chaotic, perfectly capturing that bold venture into the unknown.

My absolute favourite thing about this series is the song weaving though. The connections to the world and the people and creatures in it always makes me think of the Force from Star Wars, but the tension between using it in harmony with the world and twisting it into something darker and more dominant honestly feels like how the Light and Dark side of the Force should have been done in the films. Jamie captures that tension, the temptations and the repercussions of using those powers to dominate and control with so much more sophistication, empathy and appeal than those films ever managed!

I also loved the turbulent nature of alliances. Throughout the book, you're never sure who the good guys are and who the baddies are, as more and more of the world is revealed and people reveal themselves and their motives. That is, apart from the crew, who are beautifully solid and dependable, a rock in the middle of an ocean of uncertainty.

I've always been a big fan of Jamie's illustrations, and they're just as magnificent in this book, perfectly capturing the fantastical and wondrous crew, ships and locations.

I'm so excited to see where this series goes next! A definite five moon read!

Frostheart: Escape from Aurora is published by Puffin Books and is available now. I was sent a review copy in return for an honest review.