Review - The Court of Miracles

The Court of Miracles by Kester Grant 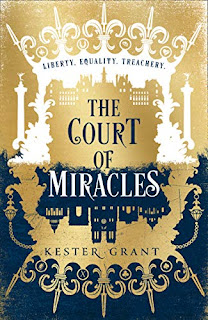 In the violent urban jungle of an alternate 1828 Paris, the French Revolution has failed and the city is divided between merciless royalty and nine underworld criminal guilds, known as the Court of Miracles.

Eponine (Nina) Thénardier is a talented cat burglar and member of the Thieves Guild. Nina's life is midnight robberies, avoiding her father's fists, and watching over her naïve adopted sister, Cosette (Ettie).

When Ettie attracts the eye of the Tiger – the ruthless lord of the Guild of Flesh – Nina is caught in a desperate race to keep the younger girl safe. Her vow takes her from the city's dark underbelly to the glittering court of Louis XVII.

And it also forces Nina to make a terrible choice – protect Ettie and set off a brutal war between the guilds, or forever lose her sister to the Tiger.

The Court of Miracles is fantastic.

A beautifully twisty plot and a fascinating setting, with a beautiful young innocent tossed into a dark world of powerful criminal guilds and opulent, vicious royalty, and a clever, brilliant thief determined to save her at any cost.

Now, I really don't know much about Les Miserables. I know enough of it to be aware of some definite crossovers/influences, but I'm sure there was a lot I missed. As far as I can tell, The Court of Miracles is happening alongside Les Mes in some kind of alternative reality France, with the two separate stories crossing over and occasionally colliding. In that alternative France, the Revolution failed, and it's fascinating to see this alternate history where the monarchy still holds power and the leaders of the revolution were the ones to face the guillotine.

I loved the setting, with the courts, and how these were slowly introduced over the course of the novel. I had to keep track of how many I'd actually seen and what the different ones were, but this felt like a very organic way of revealing them. Also, I absolutely love the fact that among the smugglers, thieves, assassins and whores, there was a court of accountants and auditors, and that they were the truly scary ones! They were reminiscent at times of the Guilds in Ankh-Morpork, though with a much more sinister and scary edge. I loved the uncertainty of it all, who was an ally, who couldn't be trusted, and who was just out to serve themselves.

Nina was a very cool main character, who was always very impressive. I loved exploring the city through her eyes, and some of the dilemmas she faced were really quite emotional. Her relationship with Ettie really drove the narrative and I found myself enthralled.

I'm really looking forward to returning to the Court of Miracles for further daring adventures.

A definite five full moons for this shiny book.

The Court of Miracles is out on 4th June from HarperVoyager. I was given an eProof via Netgalley in return for an honest review.
Labels: review