Today the Book Worm Hole is taking us to Paris, on a blog tour with Judith Eagle, author of The Secret Starling and The Pear Affair. 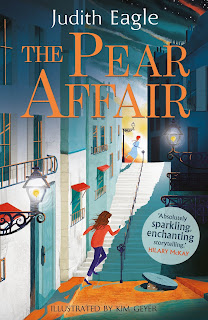 When Penelope Magnificent's awful parents tell her they're taking a trip to Paris, she surprises them by begging to go along.

Nell is usually content to avoid her money-obsessed father and her fashion-focussed mother, but Paris holds something very dear to her... her old au pair Perrine - Pear - lives there. Pear used to write to Nell every week promising to come to her rescue but recently the letters have stopped...

Arriving at her parent's posh hotel, Nell is determined to find Pear... but no one has seen her at her last known address, and no one seems to want to tell her anything about Pear's whereabouts.
Luckily she befriends the hotel bellboy who introduces her to the world of tunnels underneath the city, and together they set out to find Pear, whilst uncovering an extraordinary mystery of their own...

The first thing I really want to say about this book is that the setting, and the way it is worked into the story, is just wonderful. It really brings Paris to life, from its grand boulevards and department stores to the quiet cobbled streets and hidden underground pathways, beautiful old hotels, creepy catacombs, high end fashion establishments, all leap fully formed from the page into the imagination. The descriptions of the foods too, those intricate French pastries that fill the bakery windows there, were just so delicious! It's a beautiful, magical city and this really comes across so well in Judith's writing.

Now on to the characters. I'm going to start with Nell's parents, the Magnificents. They are horrible! Absolutely awful! Dahl-esque levels of utter horrendous parenting. This does, however, make them rather superb characters. There are ongoing debates about the tendancy for parents in middle-grade fiction to go missing, thus freeing up the young characters to go on adventures without parental interference, but I think this is the first time I've seen it done by having parents who just forget their child is there, or who really wouldn't care if she was there or not. It really works though, I loved hating them so much and I instantly felt for poor Nell.

Nell herself is much nicer. She's caring, thoughtful, adventurous but not without her flaws. One of the my 'favourite' moments in the novel comes when she's having a panic attack and the way it is presented is a really powerful piece of storytelling. There's also an interesting assortment of child supporting characters, each of whom felt like a well-defined character without pulling the focus of the story away from Nell herself.

The Pear Affair is a book about a mystery, several mysteries in fact. The central one is what happened to Pear, Nell's au pair, but there's a lot more going on in Paris and it all feels like it hangs together really well. I was fully invested in what was happening as Nell delved further and further into the sinister events and I was very satisfied with how everything concluded. The plotting does get quite complex but it's fast moving and pacy and all does come clear before the end.

I really enjoyed The Pear Affair, and Nell's Parisien adventures. With endearing characters, an exciting plot and a beautifully realised setting, this is a hit.

The Pear Affair by Judith Eagle is published by Faber and Faber on 5th March 2020. I was sent a copy in return for participation in this blog review, and an honest and fair review.

Don't forget to check out the rest of the blog tour, including a chance to win a special Pear Affair bundle! 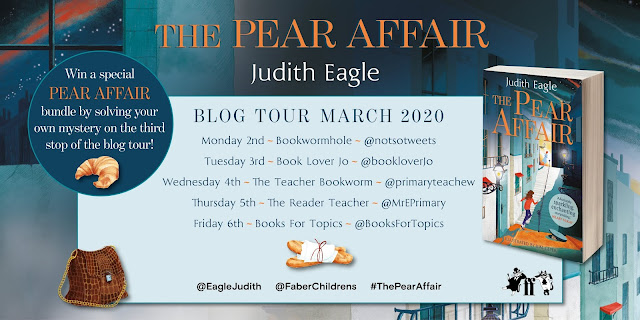