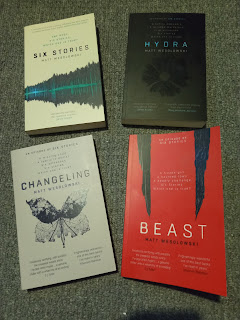 There are currently four books in the Six Stories adult crime series. Six Stories is the first. That's followed by Hydra, which is technically a prequel. Then Changeling, and the fourth, Beast, comes out in February 2020. Today I'll be reviewing them all together, because most of my review will focus on how the stories are told and what they have in common, rather than the plots. This will therefore be a spoiler-free review. 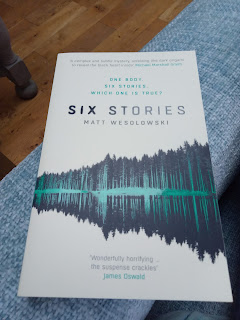 Each book is a stand-alone, self-contained story and they can be read in any order without any spoilers or confusion. I actually read Hydra after Changeling, but apart from that I read them in sequence. There are references made to cases and events from the other books, particularly in Beast, looking back at Changeling, but this is done in such a way that it doesn't depend upon any knowledge of those events, or disclose anything that would ruin the earlier story.

The format of these books is one of the things that really makes them stand out. Each one is written as a series of six episodes of a  'true crime' podcast. The closest we come to a protagonist is Scott King, the podcaster, though he doesn't take an active role in the actual story (generally). Instead he looks at old, cold cases and shows them from new perspectives. There are a few liberties taken maybe. He says he's not looking to investigate the cases or find new evidence, and yet that's invariably what he does, and he talks about each series being six interviews, six pairs of eyes, though he usually ends up including a few different people in each episode. This is all quite forgivable actually. I guess it comes across as a pretension of the character and never feels like a writing error. Each book does stick rigidly to the episodic style.

These books are incredibly readable. I think it's that episodic quality. I read all four across four days (even rushing to my nearest bookshop on day two for the one I was missing) and it felt more like I was binge listening to a podcast rather than spending days reading. They're not particularly long books, and overall they felt dynamic, fresh and very exciting.

They are also very, very dark!

It feels like Matt Wesolowski just takes you by the hand and leads you out into the darkness, and then locks the door as he leaves. 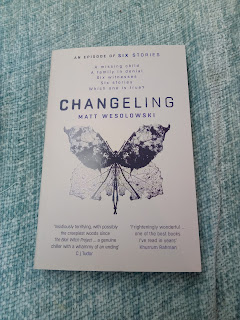 These books are absolutely brilliant at conjuring up an atmosphere of unease and discomfort. Matt taps into some very base fears. As a parent, the scenario in Changeling of turning around and your child just being gone is one of the few things that genuinely terrifies me and I think every parent who's lost sight of their child in a busy shopping street has felt it too. Hydra was probably the one that most got under my skin. As these stories unfold and more is revealed the sense of horror just grows in the most deliciously dark way. Then, generally around the fifth episode, everything falls into place in a really satisfying way, and all that's left is to see how they did it, with maybe a final twist or two.

I need to talk about the supernatural elements too. These are the final master stroke. Each novel in the series makes reference to some kind of supernatural being. Six Stories has a marsh witch and a beast out in the woods, Hydra has a number of games that mess with forces beyond our knowing. Changeling has fairy folk holding court in the forest and Beast has a vampire, (the juxtaposition of the weather event nicknamed The Beast from the East with an actual beast from the East is simply superb). I love a bit of the supernatural, the idea that there might be something out there, in the dark places of the world, especially when this is placed in a contemporary setting. What I feel Matt does incredibly well is a very delicate balance. The supernatural is never used as the explanation for events, it's never confirmed to be real, and you could easily read each novel as a dismissal of the supernatural causes of events, but... yes, but you could also read it another way and I don't think that aspect is ever totally disproved. As Scott King is fond of saying, he's not here to explain everything but to start a discussion, and I love how this is left somewhat open to interpretation. 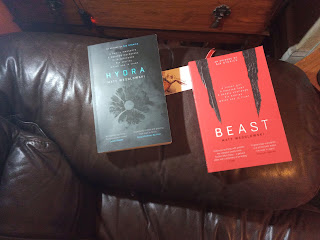 Real world issues also play a very big part in these stories. It's not all witches and monsters. A common theme is parental failings, and how it can effect children. Through the course of the stories we see parents who are neglectful, who have alcohol and substance abuse issues, who are physically and emotionally abusive and manipulative, and parents who feel like they are doing their best but are simply absent, compensating for a lack of love and support with material gifts. Internet fame is another very contemporary theme, with its vloggers and its trolls, and it's a strong part of both Hydra and Beast, though both books look at it from very different perspectives.

By blending contemporary issues with a rich pagan folklore, steeping it in darkness and presenting it in the setting of an episodic crime podcast, Matt Wesolowski has created something truly special with his Six Stories series.

I think Hydra is probably my favourite overall, but each one brings something new and chilling. I'm giving the series as a whole five moons.


I was sent a proof copy of Beast by the publisher in return for an honest review. The rest I went out and bought myself.