Review - Only You Can Save Mankind by Terry Pratchett

Only You Can Save Mankind by Terry Pratchett.

I was sent a copy of this book by Penguin Random House in return for an honest review.

Johnny Maxwell is just an ordinary boy – not smart, popular or rich.

But he does love video games.

And as his parents argue themselves out of a marriage, Johnny plays at becoming humanity’s’ last hope, shooting invading aliens out of a pixelated sky. Then comes a message from the last remaining alien spaceship: We Wish to Talk.

And suddenly Johnny is thrust into the very real world of the video game, and comes face to face with an alien race that needs his help. 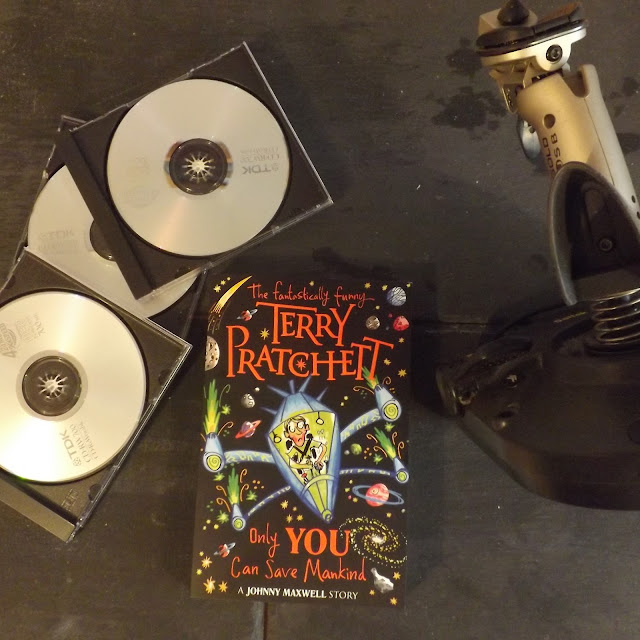 I remember reading this book about twenty years ago when I was spending a night at my aunt's house and looking for something to read, back when I was first starting my explorations of the Discworld. It's great to see it getting a reissue, with a smart new design. It is a children's book, mixing real world and sci-fi/computer game settings.

I was actually a little nervous when I sat down to read it. In the last two decades I've become a huge fan of Terry Pratchett, but Only You Can Save Mankind was first released in 1992, and it's all about computer games, and computer games in 1992 were very different to the ones we see today. My biggest concern was how aged the book would feel.

Luckily, Only You Can Save Mankind has aged very well considering the advances in computer technology over the last few decades. Johnny Maxwell is playing a game where he is controlling a space ship armed with lasers and a limited supply of rockets. Streams of enemy fighters course across the screen in front of him and he has to shoot them all down to get to the final boss encounter. I saw my eight year old son playing an identical sounding scrolling shooter just last month. The constant streaming news coverage of a war in the Middle East also feels just as topical today as it did in 1992, sadly. Johnny's world is one where warfare resembles computer games, and computer games resemble the news coverage of warfare, and if anything, that is more true today than ever before.

The main story is a strong one. Johnny is left confused when the alien ships he's meant to be blowing up suddenly surrender. Despite not really believing it for a while, he promises to help the mother ship get home and soon finds himself defending it from other gamers. The plot fizzes along quite nicely, split between Johnny's day to day life with his gang of friends and his night time adventures in space with the aliens, and Johnny is a good, sympathetic character. It's never very clear why all of this is happening, whether it's a dream or real, and I quite like that ambiguity. I don't think any explanation could really have held up. The book also raises interesting questions about human nature, and why so many of our computer games involve us shooting things without thinking about why.

There's also a lot going on in the background, touching on a lot of fairly sensitive subjects. Johnny's parents are going through "troubling times" which may mean the end of their marriage, and Johnny is often getting neglected as a result. The book deals with sexism (a girl in a computer game shop? Shock!) very successfully, and the confident, decisive, competitive Kirsty is an excellent contrast to the rather uncertain Johnny. There are also smaller sections that raise questions about racism, peer pressure and gangs, though these aren't really dealt with in any depth. It would make a good starting point for a teacher or parent to start a conversation with a younger reader about these topics, but doesn't really do much to address them itself.

The artwork in the reissued version is great too, with cover and interior illustrations by Mark Beech.

I'm going to give Only You Can Save Mankind four moons. It's a nice, intriguing little story that raises some very interesting questions, and Johnny is a great everyday hero.

Only You Can Save Mankind is the first of three books in Terry Pratchett's Johnny series, and is reissued on 22nd February 2018 by Penguin Random House.