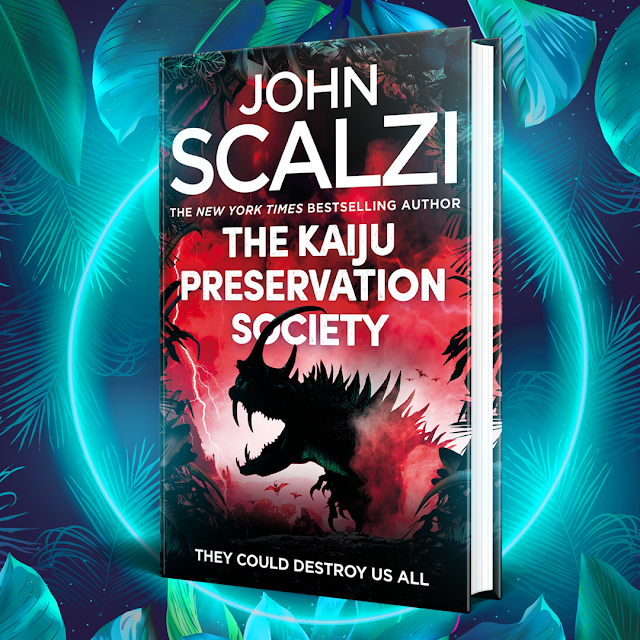 When COVID-19 sweeps through New York City, Jamie Gray is stuck as a dead-end driver for food delivery apps. That is, until Jamie makes a delivery to an old acquaintance, Tom, who works at what he calls "an animal rights organization." Tom's team needs a last-minute grunt to handle things on their next field visit. Jamie, eager to do anything, immediately signs on.

What Tom doesn't tell Jamie is that the animals his team cares for are not here on Earth. Not our Earth, at at least. In an alternate dimension, massive dinosaur-like creatures named Kaiju roam a warm and human-free world. They're the universe's largest and most dangerous panda and they're in trouble.

It's not just the Kaiju Preservation Society that's found its way to the alternate world. Others have, too--and their carelessness could cause millions back on our Earth to die.

Good evening and welcome to the BookWormHole, where I'm hosting another blog tour!

The Kaiju Preservation Society is the first of John Scalzi's books I've read, and luckily for me is a standalone adventure. I'm pretty sure it is also the first COVID-era book I've read, and I found it a little weird to be reading about the start of lockdowns, hope for vaccines and the like. However, that just forms a little bit of scene-setting at the start of the adventure, a reason for unemployment, a few minor medical concerns, and then is forgotten when the adventure moves on to much more exciting topics.

More than anything else, The Kaiju Preservation Society is a fun book! There's scientific explanations given for much of it, but I don't know how well any of it would stand up to serious scientific scrutiny. That's not really important though, at least for me. This never tries to be serious science fiction strongly grounded in scientific reality, it's a story about huge monsters roaming a land beyond ours, their conflicts and their interactions with a small group of inquisitive humans. It's Jurassic Park meets Godzilla. It's big, it's bold, it's exciting! It also has some very funny moments, mixed in with some darker tones, because for all the jokes and games this is a very deadly world!

One thing The Kaiju Preservation Society suffers from is the same problem Jurassic Park (the first one) has. There's this long build up to a big reveal, as people are recruited to a mysterious organisation, go through a curious interview and medical processes, before being flown "somewhere" with no idea what they're going to see when they get there. But like Jurassic Park with its dinosaurs, we, the reader, have a pretty good idea what it is they're going to see because it's in the title and on the cover. I think both would be fun to discover without that, to go in with absolutely no knowledge and experience it with the characters, but sadly I just don't think there's any way of achieving that without some kind of bait and switch.

One other concern was the way the novel plays coyly with some recent political events, with references to a fairly hopeless president and his boorish adult sons, that are clear references to Trump, but without ever daring to name him.

The Kaiju Preservation Society spends a long time establishing its setting and its vast, monstrous inhabitants, and it's business as usual there for much of the book, with the action really picking up towards the end of the book. But it is a fascinating setting with an interesting group of characters and I enjoyed the slower development. And when things do pick up, it's with a shocking suddenness that quite took me by surprise.

The Kaiju Preservation Society is fun, exciting and fascinating!

I was given a proof copy by Black Crow PR in return for this honest review and participation in this blog tour.  John Scalzi's The Kaiju Preservation Society is published by UKTor on March 17th.

Don't forget to check out the rest of the blog tour for more reviews and exclusive content! 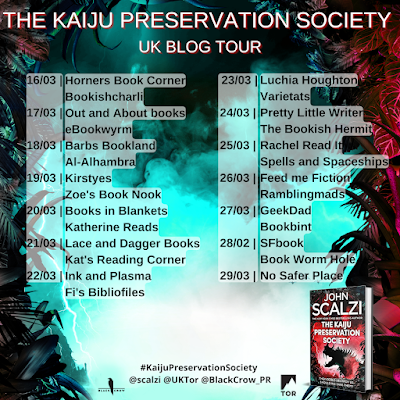