Long time readers of my blog may remember that I did an interview last year with Karen M McManus, as part of the FCBG Children's Book Awards. That can be found here.

Well it's award season once more, and this year I'm thrilled to have Jonathan Stroud visiting the Book Worm Hole. Jonathan's book, The Outlaws Scarlett and Browne is a book I absolutely loved! It's a real mix of genres, with a quasi-historical, quasi-sci-fi setting, an England broken into separate kingdoms along medieval lines, but with a delicious Western tone to the whole thing, a fascinating plot and brilliant characters.

The Federation of Children's Book Groups Children's Book Award is a wonderful award, and one of the few voted for entirely by child readers, so I'm really pleased I was asked to participate in their blog tour again this year.

So please, enjoy my interview with Jonathan Stroud, below, and check out the other blogs to learn more about the books and authors nominated for this award. 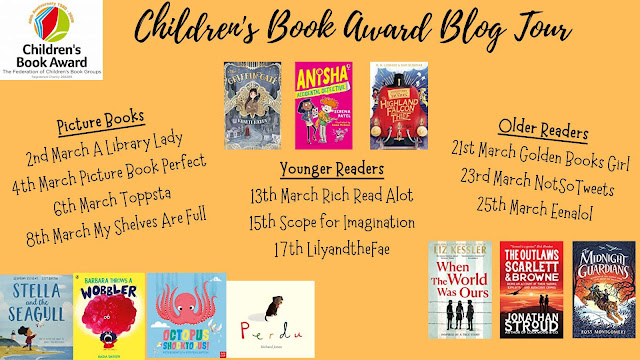 One of the things I love about The Outlaws Scarlett & Browne is the mix of genres. It's dystopian, with a strong Western theme and historical touches too. How did you come up with that blend, and what were your main influences?

Over the past few years, I’ve been thinking a lot about ‘Britishness’ and what that might mean. I had an impulse to write something that explored this in some form, and it eventually manifested itself, after lots of false starts and cul-de-sacs, as a British Western. I set the story in the future, long after an unspecified catastrophe (the ‘Cataclysm’) has turned the world upside down. The country is wild and desolate, and packed with savage beasts and the cannibalistic Tainted. I thought there was something inherently amusing about turning our placid Home Counties into a much more hostile and threatening landscape. Surviving humans barricade themselves inside small fortified towns, forming inward-looking communities that are frightened of the world beyond and intolerant of difference. My heroes, Scarlett and Albert, are outsiders who are not afraid to explore the wilds; ultimately, they are much more accepting and tolerant than the societies that reject them. I very early hit upon the idea of structuring the story around a journey along the Thames from source to sea. A raft journey was involved, too: this gave it nice echoes of Huck Finn. As I wrote, I realized that the book was much more optimistic and less dystopian than it first seemed. Despite all the cannibals running around, this future Britain carries immense vitality and potential, and Scarlett and Albert embrace this by being outward-looking and unafraid. In terms of influences, I’d read two excellent, blackly comic Westerns in the years before I started Outlaws, and I heartily recommend them both: True Grit by Charles Portis, and The Sisters Brothers by Patrick deWitt.

We recently heard about a film adaptation for The Outlaws Scarlett & Browne, and Lockwood is also heading to our screens. What level of involvement have you had in these projects? How does it feel to have your words turned into live action?

The prospect of my books being filmed is hugely thrilling! It’s a bit unnerving too, of course, because film-making is overwhelmingly collaborative, whereas book-writing (at least to begin with) is a close, secretive sort of process in which you, the writer, retain complete control over everything. But great energy comes from collaboration, and once you’ve acclimatized to the new reality, it’s ceaselessly exhilarating. I’m a consultant on the Lockwood & Co. television series, and this has been lovely, because the guys making it have spent years getting to know the books in awesome detail and I have full confidence in everything they’re doing. I’ve been able to give occasional advice, answer questions and make the odd suggestion, but in the main I’ve just had the pleasure in watching them transmute my invented world into something new and beautiful. We’re only at the start of the Outlaws film project, but again the team that’s making it is superb, and I’m looking forward to helping out from the sidelines.

Do you approach writing the next book in a series differently to writing something brand new like The Outlaws Scarlett & Browne? What does your writing process look like?

Each book, whether it’s part of a series or not, has to have its own coherent structure, a satisfying internal arc, a strong beginning, intriguing middle and satisfying end. So, to some extent, the challenges of a sequel are the same as writing the first in a series. Having said that, I find that it always takes longer to write something completely new, as I’m having to figure out everything from scratch – the rules of the world, the nature of my characters, the voice with which the story is told. The Outlaws Scarlett and Browne took almost three years to write. One of the main problems I had was figuring out my characters. For a while, my two protagonists on the raft were a jaded middle-aged male outlaw and a sparky girl. I persisted with it for ages, despite the fact that something didn’t quite click – the energy wasn’t there. Finally, I realized that both characters were wrong. The middle-aged guy became the young, fierce, formidable Scarlett McCain; the girl became the innocent, optimistic Albert Browne. All at once, the world began to click into place around them, and fragments of writing that I’d toyed with for ages could be fleshed out into a proper narrative.

You can maybe guess from this that my writing process falls into two basic stages. The first stage, which can last quite a long time, is me thinking my way into the project – I improvise lots of scenes, jump about at random, try stuff, explore characters, experiment with narrative perspective, etc. It’s good fun. Essentially, I’m looking for the spark and energy that will permanently fire the eventual book. Once I’ve got it, I then put a lot of time into figuring out the book’s plot and structure. I’ll create chapter plans and then seek to write, more or less linearly, from start to finish, incorporating the good stuff from the first stage. There are always false moves even now – scenes that peter out, complexities that have to be planed away – but little by little I home in on the eventual shape of the novel.

Will we get to see more of Scarlett and Browne? What do you have planned for them?

Yes! The sequel, The Notorious Scarlett and Browne, is on the home straight right now. We’re just reaching the copyediting stage. It’s taken about 15 months to get to this point, which is much faster than with Book I. This is because I had to wrestle with the plot, but not with the characters or narrative tone – and that saved a LOT of time. Publication in the UK is due for 7th July this year.

We pick up with Albert and Scarlett about six months into their career as outlaws, and they’re doing pretty well at it – their combined talents make them a formidable proposition when it comes to bank robberies. But both of them are in denial about their pasts, which pretty soon come back to haunt them in different ways. We’ve got plenty of heists, chases, jokes and gunfights, not to mention buried cities, giant gallows and man-eating owls. At its heart, though, this is Scarlett’s book. In The Outlaws Scarlett and Browne, we had flashbacks to Albert’s past, but Scarlett’s backstory was largely obscured. In Book II, we gain insights into the events that made her who she is. I’m very proud of these chapters, and of the book as a whole – and I look forward to sharing it all with you very soon

The Children's Book Awards are voted for by children. Have you got any advice for children wanting to become authors like you?

There’s nothing better than a prize that’s voted for by young readers. When I’m writing, I’m always trying to write for the child I was, as well as for the adult that I am now – these two aspects of myself coexist simultaneously. I’ve still got lots of the books and stories that I wrote when I was a child, and these definitely give me pointers about advice I’d like to pass on. The most important is: write what you enjoy. When I was 10 or so, I discovered fantasy gamebooks that gave you alternate routes through the story. I was enchanted by them, and spent ages creating loads of my own. They were great at helping me learn to control structure and narrative. But it doesn’t matter what kind of writing excites you – throw yourself into it, and the chances are that your own pleasure will communicate to your readers. Another good tip is: experiment. Try lots of different genres and types of book. I tried comics, interactive books, poems, plays, short novels… It took me years to figure out what kind of writer I actually was, but the journey to that discovery was half of the pleasure. Also: don’t be worried by things that don’t work. This is crucial. Most of my early stories were either rubbish or simply unfinished. It didn’t matter. Each mistake or half-written piece is a successful step on the road to becoming a better writer. Mistakes and missteps are part of the creative process, and should be embraced. Lastly: persevere and have fun. Like everything that’s worth having, figuring out your writerly identity takes a while – but there are great rewards waiting for you at the end.

I hope you all enjoyed that! I'd like to thank Jonathan Stroud for his time, wish him all the well for the awards, and I'm really looking forward to that new Scarlett and Brown book! I'd also like to thank Erin Hamilton for organising all of this!