Review - The Neighbour by Fiona Cummins

The Neighbour by Fiona Cummins 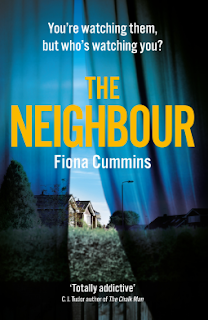 FOR SALE: A lovely family home with good-sized garden and treehouse occupying a plot close to woodland. Perfect for kids, fitness enthusiasts, dog walkers . . .
And, it seems, the perfect hunting ground for a serial killer.
On a hot July day, Garrick and Olivia Lockwood and their two children move into 25 The Avenue looking for a fresh start. They arrive in the midst of a media frenzy: they’d heard about the local murders in the press, but Garrick was certain the killer would be caught and it would all be over in no time. Besides, they’d got the house at a steal and he was convinced he could flip it for a fortune. The neighbours seemed to be the very picture of community spirit. But everyone has secrets, and the residents in The Avenue are no exception.
After six months on the case with no real leads, the most recent murder has turned DC Wildeve Stanton’s life upside down, and now she has her own motive for hunting down the killer – quickly.

I've loved Fiona's dark, creepy, slightly supernatural books, The Collector and Rattle, so I was really keen to try this standalone thriller. It didn't disappoint.
The Neighbour plays around with two different time streams, one narrated by the killer waiting for the police to arrive and telling stories about the past, the other set around a fateful few days in the neighbourhood. I felt this technique worked really well, establishing a strong foreshadowing element that added to the tension.
One thing I loved about the Neighbour is that it starts towards the end of the action. Most of the murders have already happened, and it is much more focused on the detective work and the chase, as well as the possibility of another murder, rather than us chasing the action from crime scene to crime scene. This really made it different to most of the crime novels out there. Also, while there is a strong police procedural element, it is not exclusive, and lots of the action is seen from the points of view of the inhabitants of the Avenue.
At times it feels like there are too many different points of view. It makes the story fragment at times, so many different threads to be following that I wasn't sure if they'd ever all be tied up. However the ending was a satisfying one, and everything did feel like it more or less came together. One or two threads felt like they'd been cut off a bit too sharply, dealt with in a less satisfying way, but the main plot really came together well.
Overall, The Neighbour was an exciting crime thriller with an interesting twist to the timelines.
I'm giving it four moons.
🌕🌕🌕🌕🌑

The Neighbour is published by PanMacmillan and is available now.
I was sent a free eproof through Netgalley in return for an honest review.