The Golden Butterfly by Sharon Gosling


It's 1897 and since the Magnificent Marko dramatically departed the stage, no magician has come close to performing a trick as spectacular as the Golden Butterfly. With her grandfather gone, Luciana feels that the world has lost its wonder. Then the imposing leader of the Grand Society of Magicians appears, searching for something belonging to Marko, and Luciana is drawn into a world of danger and deception. As she battles to protect her grandfather's greatest legacy, can she distinguish reality from illusion? 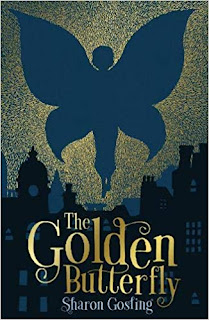 This book is magnificent!

I love the world of Victorian magic and stage shows, and it really captures the feeling that this wonderful time of magic and showmanship is fading away, replaced by music hall shows. A little wonder is going out of the world, but it's not quite gone yet.

The plot is a gripping one. It's reminiscent of The Da Vinci Code, in the way Luciana follows hidden clues and clever devices from one point to the next, slowly unfolding the mystery of her grandfather's greatest trick, the Golden Butterfly. But unlike in that book, Luciana's journey moves on long before it gets tedious, and the story moves forward with pace, drama and peril that keeps it exciting and quite emotional at times.

Like all great magic tricks, this book knows when to hide things and how to manage the big reveals, and I loved how the secrets unfolded throughout it.

It's also strongly feminist, which I really enjoyed. Luciana quickly comes to understand that when people tell her that women can't do something, what they really mean is that they aren't allowed to do it, and throughout the novel she is fighting for her own equal rights, which comes to a pay-off that was simply marvellous, and had me laughing through my tears. There are also important messages throughout about facing and overcoming your fears, being brave and finding the life that is right for you, not the one that society expects you to lead.

The Golden Butterfly is an exciting magical mystery, which delivers an important message about what girls are truly capable of achieving.


The Golden Butterfly is published by Stripes and is available now. I was given an eproof through Netgalley in return for honest feedback.