The Smoke Thieves by Sally Green


A princess, a traitor, a soldier, a hunter and a thief.

Five teenagers with the fate of the world in their hands.
Five nations destined for conflict.

In Brigant, Princess Catherine prepares for a political marriage arranged by her brutal and ambitious father, while her true love, Ambrose, faces the executioner's block.

In Calidor, downtrodden servant March seeks revenge on the prince who betrayed his people. In Pitoria, feckless Edyon steals cheap baubles for cheaper thrills as he drifts from town to town.

And in the barren northern territories, thirteen-year-old Tash is running for her life as she plays bait for the gruff demon hunter Gravell.

As alliances shift and shatter, and old certainties are overturned, our five heroes find their past lives transformed and their futures inextricably linked by the unpredictable tides of magic and war.
Who will rise and who will fall? And who will claim the ultimate prize? 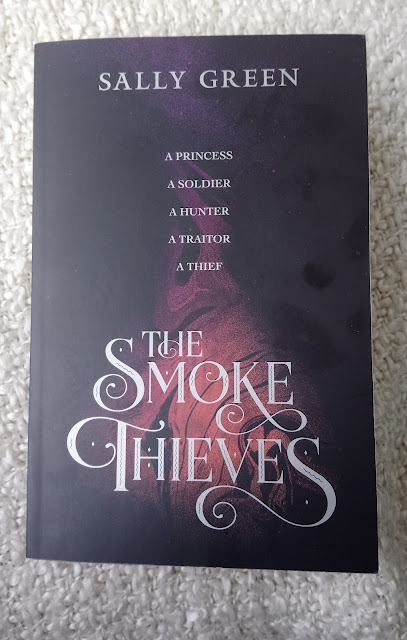 It's been too long since I last read a book like The Smoke Thieves and I loved diving into the world Sally Green has built here.

The Smoke Thieves is very much a political fantasy novel. Similar to series like A Song of Ice and Fire by George R R Martin, it tells a tale of international diplomacy and war, throwing its five main characters into different sides of the conflict. Some of them, like Princess Catherine, who is preparing for her diplomatic marriage to a prince she's never met, are in the heart of the political turmoil. Others, like Tash, the young demon hunter, starts off at quite a remove from the political action, but over the course of the novel all of their paths converge in interesting and surprising ways.

Sally Green balances five different POV characters really well. They all tell different sides of the story, and show us different aspects of the world. They all feel very different and they are all interesting. I love Tash, who risks her life acting as bait for demons so that the huge, hairy Gravell can kill them, and who dreams of the gorgeous pair of boots she'll be able to buy with her earnings. Princess Catherine's courtly life feels full of menace and very real peril, keeping me on edge the whole time I was reading, and Edyon is a wonderful example of the rogue hero, stealing for the challenge of it and soon getting in over his head.

The villains of the story are rather scary too. Because of the emphasis on politics, they are the kind of villains who lurk in the background, exuding sinister vibes and can't really be tackled head-on. Apart from the demons of course, who are a whole other bunch of creepy.

I'm really excited to see where this series goes next.

I was sent an advanced reader's copy by Penguin Random House, in exchange for a fair review. The final copy is similar to the one pictured, but in white, with the most gorgeous pinky-purple sprayed edges. I'm going to have to pick up a final copy before YALC!

The Smoke Thieves is published by Penguin Random House and is available now.