Blog Tour - You'll Be The Death Of Me by Karen McManus 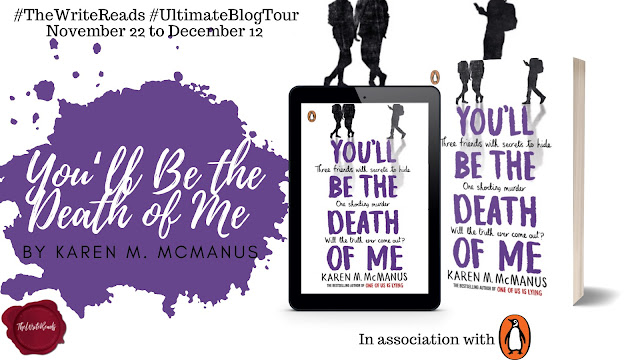 Ivy, Mateo and Cal used to be close - best friends back in middle school.

Now all they have in common is a bad day. So for old time's sake they skip school together - one last time.

But when the trio spot Brian 'Boney' Mahoney ditching class too, they follow him - right into a murder scene.

They all have a connection to the victim. And they're ALL hiding something.

When their day of freedom turns deadly, it's only a matter of time before the truth comes out . . .

Blog Tour Review - You'll Be the Death of Me by Karen M. McManus

Karen M. McManus has been one of my favourite YA crime writers since her first novel, One of Us is Lying, so I was thrilled to get the opportunity to review her latest novel.

You'll Be the Death of Me is a stand-alone thriller, unconnected to her previous novels, so we get to meet a new trio of main characters. As with her previous novels, the point-of-view shifts between the three in a rather irregular pattern, meaning that we get to see the events that unfold through a variety of different viewpoints. This was really well done, and as the novel progressed and it became clear that each of the main characters had secrets they were keeping from the others the way things were obscured and revealed was really effective and deepened the mystery.

The central trio are teenagers who had been friends and had drifted apart, and the reasons for this are slowly revealed as their day unfolds. It was really quite fascinating seeing the different layers of secrets and lies and regrets being slowly peeled away to reveal what actually happened in the past.

The relationship between Ivy, Mateo and Cal is the heart of the novel and one of the best things about it. There is this really wonderful tension between them. There are forces pulling them closer to each other, whether it's physical attraction or the bond of shared traumas, and there are forces pulling them apart, their secrets, the pressures of their own personal lives, and so on. These opposing forces are so perfectly balanced throughout the book that there is this palpable feel of tension, like they're caught inescapably in each other's orbits.

But for all the teen drama, this is also a crime novel and it's not long before they're tripping over the first body. The crime thriller elements of this novel were exceptional. I found myself fully absorbed in it, with countless suspicions and doubts but no substantial theories until the shocking reveal.

With its taut, tense teen drama and gripping crime mystery, Karen M. McManus has produced her finest YA thriller yet!

Five moons for You'll Be the Death of Me.

This review is part of a Write Reads blog tour. Please check out the rest of the tour over the next few weeks.
I was given a proof copy of You'll Be the Death of Me in return for an honest review.