My Climate Fiction by Lauren James

Good afternoon and welcome back to the BookWormHole. I'm very proud to announce that today I have a guest post from a wonderful author whose books I just adore, Lauren James!

Lauren James writes some pretty incredible sci-fi, with The Loneliest Girl in the Universe and The Quiet at the End of the World being two of my absolute favourites. They're thoughtful, intelligent, well researched and often quite emotional.

Lauren's new book is The Green Rising, a novel set in a near-future world on the bring of ecological collapse, and it looks set to be another brilliant YA sci-fi novel.

Climate change is something that should concern us all, and certainly concerns me! One very important way to raise awareness of it is through fiction, and speculative science fiction has always been a fertile ground for raising awareness and even playing around with potential solutions. So I'm thrilled that Lauren has written something for my blog today talking about some of her favourite positive, uplifting books about the climate crisis.

My new novel Green Rising is about a group of climate activists rewilding the planet after they
develop the ability to grow plants from their skin. I had to do a lot of research into climate change
while writing, but I found it really hard to find other climate fiction books. There’s not really a
resource of titles online beyond random news article lists or Goodreads collections.
To create a resource of the amazing books being published, I founded the Climate Fiction Writers
League (http://climate-fiction.org/), an organisation of over a hundred climate writers. The website
includes a database of climate fiction titles organised by genre and age category. I’ve discovered so
many amazing books through the League, and I wanted to share some of my favourite titles.
I love books which move beyond depressing dystopias set in the near-future, to show a more
positive and active approach to the climate crisis. Like Green Rising, all of these books are positive
and uplifting, and inspire readers to take action. The future isn’t hopeless, and this fiction represents
that.

The Summer We Turned Green by William Sutcliffe

It's the summer holidays, and thirteen-year-old Luke's life has been turned upside down. First his
older sister Rose moved 'across the road', where a community of climate rebels is protesting the
planned airport expansion. Then his dad followed her.
Dad only went to get Rose back, but now he's out there building totem poles, wearing sandals and
drinking mead (whatever that is) with the best of them.
Can Luke save his family when all they want to do is save the planet?

The Nature of Witches by Rachel Griffin
In a world where witches control the climate and are losing control as the weather grows more
erratic, a once-in-a-generation witch with the magic of all seasons is the only one who can save earth
from destruction. But as her power grows, it targets and kills those closest to her, and when she falls
in love with her training partner, she's forced to choose between her power, her love, and saving the
earth.

A Psalm for the Wild-Built by Becky Chambers

It's been centuries since the robots of Earth gained self-awareness and laid down their tools.
Centuries since they wandered, en masse, into the wilderness, never to be seen again. Centuries
since they faded into myth and urban legend.
One day, the life of a tea monk is upended by the arrival of a robot, there to honor the old promise
of checking in. The robot cannot go back until the question of "what do people need?" is answered.
But the answer to that question depends on who you ask, and how. They're going to need to ask it a
lot.

When copper miners plunder Zula's desert home in Gobi Altai, and Adoma's forest and river are
polluted by gold prospectors, it is only a matter of time before the lake Linet guards with her life is
also in jeopardy. How far will Zula, Adoma and Linet go to defend the well-being of their homes? And
when all else fails, will they have the courage to summon the ancient power of their order, to make
the landscape speak in a way that everyone will hear?

The Ones We're Meant to Find by Joan He

Cee has been trapped on an abandoned island for three years without any recollection of how she
arrived, or memories from her life prior. All she knows is that somewhere out there, beyond the
horizon, she has a sister named Kay, and it’s up to Cee to cross the ocean and find her. 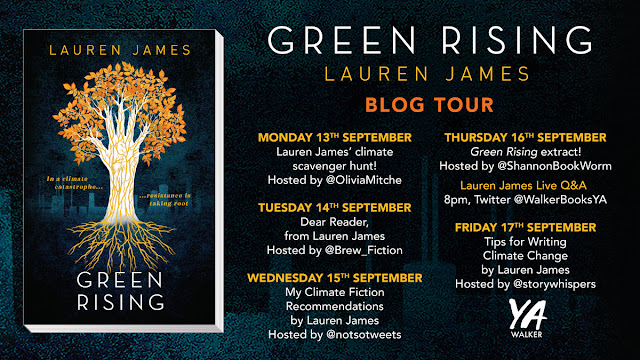 Lauren James is the twice Carnegie-nominated British author of many Young Adult novels, including
Green Rising, The Reckless Afterlife of Harriet Stoker, The Loneliest Girl in the Universe and The
Quiet at the End of the World. She is also a Creative Writing lecturer, freelance editor, screenwriter,
and the founder of the Climate Fiction Writers League.

Her books have sold over a hundred thousand copies worldwide, been translated into six languages
and shortlisted for the YA Book Prize and STEAM Children’s Book Award. Her other novels include
The Next Together series, the dyslexia-friendly novella series The Watchmaker and the Duke and
serialised online novel An Unauthorised Fan Treatise.

She was born in 1992, and has a Masters degree from the University of Nottingham, UK, where she
studied Chemistry and Physics. Lauren is a passionate advocate of STEM further education, and
many of her books feature female scientists in prominent roles. She sold the rights to her first novel
when she was 21, whilst she was still at university.

Her writing has been described as ‘gripping romantic sci-fi’ by the Wall Street Journal and ‘a strange,
witty, compulsively unpredictable read which blows most of its new YA-suspense brethren out of the
water’ by Entertainment Weekly. The Last Beginning was named one of the best LGBT-inclusive
works for young adults by the Independent.

Lauren lives in the West Midlands and is an Arts Council grant recipient. She has written articles for
numerous publications, including the Guardian, Buzzfeed, Den of Geek, The Toast, and the Children’s
Writers and Artist’s Yearbook 2022. She has taught creative writing for Coventry University,
WriteMentor, and Writing West Midlands.