Welcome back to the Book Worm Hole, where today I am on a crime fiction blog tour...
Detective Sergeant Washington Poe is in court, fighting eviction from his beloved and isolated croft, when he is summoned to a backstreet brothel in Carlisle where a man has been beaten to death with a baseball bat. Poe is confused - he hunts serial killers and this appears to be a straightforward murder-by-pimp - but his attendance was requested personally, by the kind of people who prefer to remain in the shadows.
As Poe and the socially awkward programmer Tilly Bradshaw delve deeper into the case, they are faced with seemingly unanswerable questions: despite being heavily vetted for a high-profile job, why does nothing in the victim's background check out? Why was a small ornament left at the murder scene - and why did someone on the investigation team steal it? And what is the connection to a flawlessly executed bank heist three years earlier, a heist where nothing was taken . . . 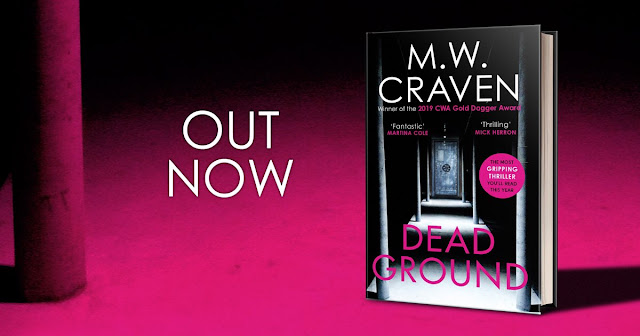 Dead Ground is the fourth book in the award winning Washington Poe crime book series by M. W. Craven, and I loved it! For anyone unfamiliar with this series, which started with 2018's The Puppet Show, then Black Summer and The Curator, it revolves around Washington Poe, a detective with the National Crime Agency, and his partner, Tilly Bradshaw. Poe is as remote, tough and down-to-earth as the cottage he lives in, on the edge of the Lake District National Park in Cumbria. He's a man who appears to have turned being disliked into an art form, and gotten very good at it too! And yet, there's something about him I can't help but like. He's honest, mostly, and on the side of right, mostly, and although he definitely has his faults he accepts them and doesn't try to hide who he is, mostly. There's a wonderful sequence in this novel where he's brought in on a case by a high level government agency, and he makes it abundantly clear that he doesn't have time for any secretive bullshit or agency posturing. He is a man who understands how people work and won't put up with them being manipulated or used.
One of the most likeable things about Poe is his relationship with Tilly, and this continues to form the emotional heart of the series and just gets better over time. Tilly is a computer and science genius with very little idea of how people work and how the world works, the complete opposite of Poe in so many ways. They complement each other wonderfully, both in how they approach the crimes they're tasked with solving and how they work within the narrative. It's becoming harder and harder to imagine one without the other now, they work so well together. Poe is incredibly protective of Tilly, however much she exasperates him, and this is lovely to see and another reason why he is a sympathetic hero. There are some wonderful examples in Dead Ground of how Poe doesn't care about expectations or standards of behaviour, if someone threatens to hurt Tilly in any way he just won't stand for it.
This is a crime thriller, so of course the mystery is key to its success, and the mystery in Dead Ground is excellent! The opening murder seems to get a lot more attention than it would normally deserve, which is an excellent hook. Why are MI5 so interested in a man found dead in a pop-up brothel? Links are found to an older, unsolved case and for much of the book it's frustratingly hard to see how all the parts fit together until all the pieces are revealed and everything comes together in a startling and dramatic conclusion. It goes far, far beyond the Cumbrian landscape and consistently threw up shocks and surprises that had me totally gripped! There are also a few of those "Oh of course, I should have seen that" moments that I do so love when reading a mystery novel.
The subplot with Poe losing his cottage is tied in well with the plot so that it never feels like a throwaway or a distraction, and I love the development of supporting characters from earlier books, like the Goth coroner in Newcastle and the FBI agent, and the introduction of what I hope will become regular supporting characters. Surely that can't be the last we see of the incredible Bugger Rumble! There are enough links here to make it feel like plot lines are progressing through the series, while still making it an accessible book for someone who's never read another M W Craven thriller.
Dead Ground is an exciting crime thriller suitable for anyone who hasn't read the previous installments of the Washington Poe series, and required reading for anyone who has! I'm giving it five moons.
🌕🌕🌕🌕🌕
Oh, and I probably wouldn't dare show my face in Durham again if I didn't mention that there's a Waterstones exclusive edition which features a short story set in one of my favourite bookshops, Waterstones Durham, home of the fantastic Fiona Sharp and her crime fiction book club.
I was given a review copy of Dead Ground by M W Craven by Little Brown UK in return for participation in this blog tour and an honest review.
Labels: blog tour crime review