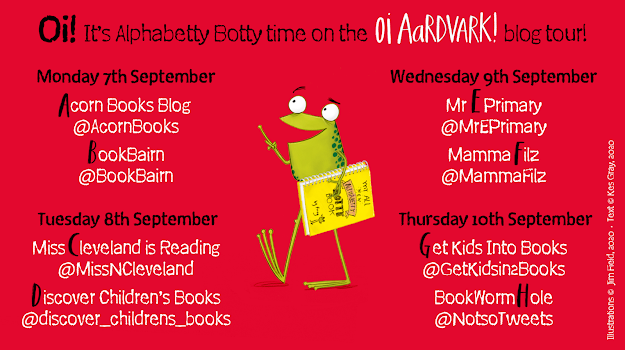 My kids and I have been big fans of the Oi books every since the first one, Oi Frog, so I was very pleased to be given an opportunity to review the latest installment, Oi Aardvark. Due to the current state of the world, I read it over Zoom with my three children, who are aged 7-13, and we all really enjoyed it. I then read it with my two nieces, aged 3 and 7, and they loved it too. Clearly this is a book that easily appeals to a wide range of ages! 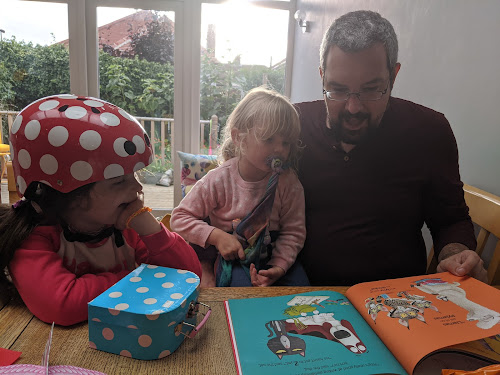 The Oi picture books have such a simple concept. The rather bossy Frog likes to dictate what other animals can sit on, and it has to be something that rhymes with their names. He's joined by the series' other two main characters, Cat and Dog. Given the sparseness of the dialogue and lack of descriptive text, as is quite usual in picture books of this nature, I'm always very impressed with how well the personalities of all three come across. Frog is very forthright and kind of bossy. Cat is beautifully loaded with sarcasm and sneers, never quite taking Frog seriously but happy to go along for the ride in the hope that he'll see Frog fail, and Dog is loyal, easily impressed and not too bright. The three together work really well, and I think this dynamic is, for me, one of the reasons the series is so successful.

They're also very funny and very clever, and Oi Aardvark doesn't disappoint at all on this count. This time Frog is writing his own book, and it's one that follows the same principle as the book we're reading, a neat little meta trick. But Frog's book is alphabetical, taking animals from A to Z and telling them what to sit on. This introduces a very clever little mechanism that went over really well with the young readers I tested it on. Because you know that the animals on the next page will start with a certain letter, you automatically start trying to guess what the animals will be, something that wasn't really possible in the earlier books. My youngest said in his review:

which shows the effectiveness of the A to Z format. And his older brother said:

"I loved this book because it was hilariously funny and I loved trying to guess what the animals sat on."

The guessing what's coming, and the anticipation, really raise this book up in an already outstanding series.

As my daughter said:

"A hilarious alphabetical book with genius rhymes, adorable animals and the funniest characters!"

I don't think I can put it any better than that.

Oi Aardvark is out now, from Hachette. I was sent a copy of the book in return for participation in this blog tour and an honest review.