Called in to investigate, the National Crime Agency’s Washington Poe and Tilly Bradshaw are faced with a case that makes no sense. Why were some victims anaesthetized, while others died in appalling agony? Why is their only suspect denying what they can irrefutably prove but admitting to things they weren’t even aware of? And why did the victims all take the same two weeks off work three years earlier?

It’s Christmas and a serial killer is leaving body parts all over Cumbria. A strange message is left at each scene: #BSC6

And when a disgraced FBI agent gets in touch things take an even darker turn. Because she doesn’t think Poe is dealing with a serial killer at all; she thinks he’s dealing with someone far, far worse – a man who calls himself the Curator.

And nothing will ever be the same again . . . 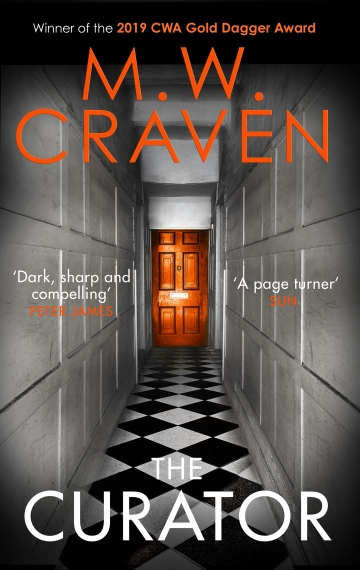 Today I am reviewing The Curator by M.W. Craven, as part of the blog tour for his book launch.

The Curator is the third in the Washington Poe series, following The Puppet Show and Black Summer, both of which I loved, so I was very excited to get an early read of the latest installment.

Like the rest of the series, The Curator is set almost entirely in Cumbria, and is very dark, often quite nasty, crime fiction. The setting always plays such a large role in these stories, and I do love Cumbria, so this is something I always particularly enjoy about these books. This story is set in winter, and the remoteness and the sudden and often bitter weather has a significant impact at times. I love the contrasts in the scenery too, from the Shap fells that Poe calls home to the coast and islands of Barrow-in-Furness.

At the heart of the Washington Poe series is the relationship between Poe, the toughened detective, and Tilly, the socially awkward genius analyst. It's great to see this being developed further in The Curator. I can see them both changing, because of the other, and the character development and relationship development is absolutely spot on. I particularly like seeing how Poe now sees other people reacting to Tilly, his defensiveness of her.

On with the case, and this is a cracking one. It opens with a fantastically unpleasant scene, at least it does after a rather gruesome prologue. It then unfolds with pace and mystery, as the pieces are slowly slotted together. There are some enticing diversions before it builds into a series of dramatic climaxes and a totally shocking finale.

I did feel that there were a few balance issues however. One of the murder victims gets a lot of attention in the story, with careful walkthroughs of her property. Another is dealt with mostly by another team, off-screen. Another plot point is the #BSC6 element (I'm going to carefully avoid spoilers here, don't worry.) I thought this was a fascinating element of the story, but was left feeling like it had all been a bit underdeveloped as the story moved on at pace. I'd have loved to see a longer, darker treatment of this particular subject, something I've been gripped by when I've come across similar things in other thrillers.

Maybe they're sacrifices worth making though, because it keeps the pace of the novel so fast and relentless, and I do love that about it.

Oh, and the ending. That ending. I'll be honest, I was unsure about the ending. But after thinking about it for a bit, I decided it came down to one thing. I trust M.W. Craven. I trust that he knows where he's going with these characters, that there'll be repercussions for their actions, and consequences for their decisions, and I'm excited to see what they'll be.

The Curator is available now from Constable Books in hardcover and ebook.