Blog Tour - A Wash of Black by Chris McDonald 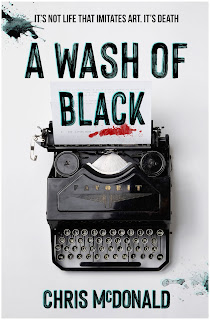 A Wash of Black by Chris McDonald

IT'S NOT LIFE THAT IMITATES ART. IT'S DEATH.

The body of a famous actress is found mutilated on an ice rink in Manchester, recreating a scene from a blockbuster film she starred in years ago.

DI Erika Piper, having only recently returned to work after suffering a near-fatal attack herself, finds she must once again prove her worth as the hunt for the media-dubbed ‘Blood Ice Killer’ intensifies.

But when another body is found and, this time, the killer issues a personal threat, Erika must do more than put aside her demons to crack the case, or suffer the deadly consequences.

Good morning! I'm blog touring again today. Or rather, hosting so the book can tour I guess.

Anyway, it's with a publisher I've only just discovered, Red Dog Press. This is the second of their books I've read. The first one was Stay Mad, Sweetheart by Heleen Kist, a feminist revenge thriller in the high tech start ups of Edinburgh. Today we have A Wash of Black by Chris McDonald, a Manchester-based slasher-killer detective yarn. Between the two books, I can definitely say that Red Dog Press are an independent publisher to look out for, for any crime fiction fans!

Right, that's enough preambling. On to the book!

A Wash of Black opens with a rather grizzly murder. The prologue actually shows the murder from the perspective of the killer, giving it a really gripping intro. After that everything is seen from the perspective of our hero, Detective Erika Piper. Erika is a great character. There's an incident in her past that is slowly revealed over the course of the book, and it's clearly affecting her. She's just returning to work after a year away and it has an impact on a lot of her relationships. This post-traumatic back story is done really well, and from the start it feels like these are people with history. Also her partner is called Liam, so straight away I liked him!

I really liked the idea of murders recreating movie screen deaths, though unfortunately that isn't really maintained through the whole book. I would have loved to see more discussion of the deaths in the novel series within this book. Even after two deaths no one ever seemed to ask what happened in the third book, which was a little disappointing. This was a fantastic idea that I think really should have been explored more.

The mystery at the heart of A Wash of Black is intriguing and works well. I guessed the culprit about halfway through, when a small clue was thrown out, but there were definitely enough twists and turns to keep me reading to the dramatic ending. The ending is excellent, though I won't go into any detail about just how the story unfolds.

Oh, and it has the absolute wildest book event I've seen. I'm glad I've never been at one with actual fisticuffs!

One surprising thing about A Wash of Black is the level of descriptive detail. Erika doesn't just get her laptop out, she finds a convenient plug socket and lifts the lid. She doesn't open her door without us knowing which pocket she took her key from. There are at least two sequences of police officers having trouble finding parking spaces. It feels almost cinematic, walking the reader carefully through scenes as we would see it on screen rather than taking literary shortcuts. This is also carried through in the detailed descriptions of characters' appearances and clothing. It fits well with the film-based murdering in the book.

A Wash of Black is a great detective versus killer novel, with an intriguing set-up and exciting payoff. 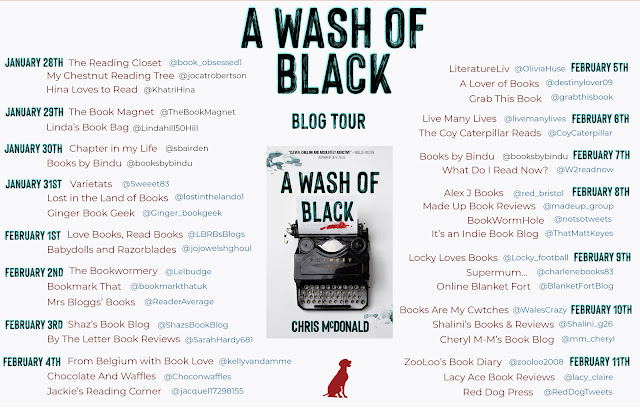