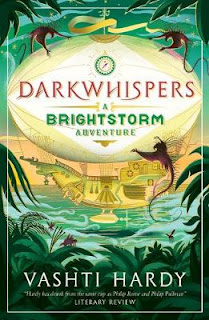 The Brightstorm twins are back for another adventure! Eudora Vane has organized an explorer fleet to search the last known destination of missing adventurer Ermitage Wrigglesworth. Harriet Culpepper and the crew of the Aurora join the mission, but they don't believe that Eudora has good intentions. What is she really looking for? Arthur is determined to find out, and when disaster strikes and the Brightstorm twins are separated, will he and Maudie be able to find their way back to each other?

Brightstorm is one of my absolute favourite books, so I was thrilled to get an early copy of the sequel from Scholastic, and dived into it immediately.

It did not disappoint!

Where Brightstorm drew a lot of its inspiration from the Scott expedition to the South Pole, with three crews of skyship explorers engaged in a race for the pole, Darkwhispers takes us off into unfamiliar skies, an armada of skyships heading for the Eastern Islands in search of a missing adventurer, the delightfully named Ermitage Wrigglesworth. The sinister Eudora Vane is behind this rescue mission, so we just know that she must have some evil motives, but we're kept guessing for much of the book.

One of the things I love about Darkwhispers is how well it evokes a bygone period of history, the age of exploration. There's something so thrilling about a world that hasn't been fully mapped, about voyages out into the unknown, with just a ship and a good crew to support you. Vashti Hardy really captures the romanticism of this idea, and everything that goes with it. I love that they don't just fly off into the unknown, but there is research, construction, societies of geographers and explorer families. There's such a richness to it. It's not all ideal though, and Darkwhispers doesn't shy away from showing the downside of this life, from the the cutthroat competition to the exploitation of resources, both at home and in newly discovered lands, that so frequently accompanies exploration. This moralising is done subtly, gently, but it is nevertheless an important element of the Brightstorm world, just as it has been of our own and it's good to see it recognised.

It's also great to see the continent names being changed to reflect a more balanced, respectful approach. It feels like the people of Lontown are changing and adapting in a positive way.

If the exploration bears resemblances to our own history, the technology is so much cooler! It's great to see this being explored further in this sequel. Skyships are just so utterly cool, and the Aurora is coolest of them all. Alongside it we see some cool new additions and adjustments, and we also get to see some alternative tech, less steam-punk but no less fascinating. I'm interested to see if and how this will influence this fantasy world moving forward. There are other seeds that I am sure are being planted for further stories in here, particularly around the different paths the Brightstorm twins might take. I really enjoyed them being mentored by different members of the crew and how this can shape their development.

Maudie is brilliant once again. Role models for STEM areas, particularly for girls, are so important, so it's great to see Maudie getting stuck into mechanical and engineering tasks with so much enthusiasm and ability. Arthur often seems to be the more reflective, thoughtful one of the Twinnies, and it's from him that we get some of the emotional insights that run through the book, about empathy and understanding, but also about the need for justice and what that actually means. Separating the two for much of the book is a really interesting way to see them more as individuals and worked really well for me.

The book itself is absolutely gorgeous. The cover just perfectly captures the rainforest adventure. There are map flaps in the front, with two gorgeously detailed maps of the areas covered in the book, and the chapter headings are beautiful. Jamie Gregory and George Ermos have really excelled themselves with the presentation and design here.


A beautiful, exciting adventure, with all the romance of old fashioned exploration voyages but with a serious social conscience. 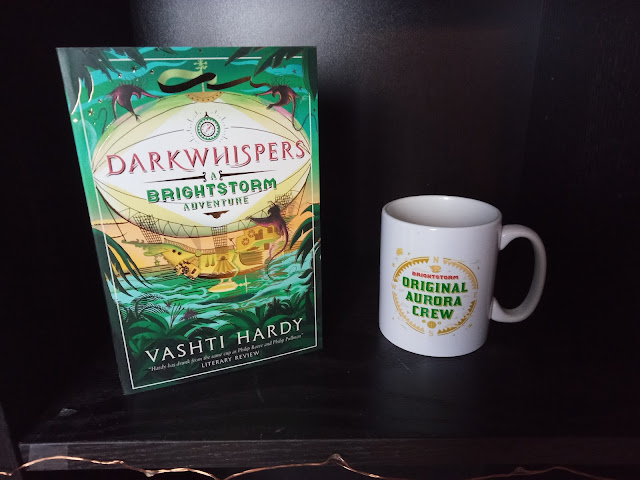 Darkwhispers by Vashti Hardy is published on 6th February by Scholastic UK. I was sent a copy by the publisher in return for this honest review.