Review - The Ghouls of Howlfar


The Ghouls of Howlfair by Nick Tomlinson 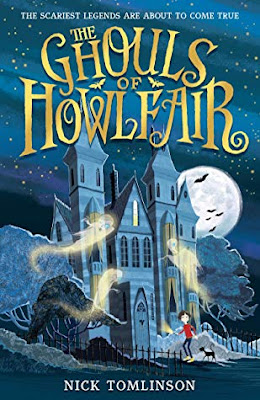 Molly Thompson has lots of questions. Questions like, is her Aunt Carol an undead fiend who drinks the blood of the living? Is she secretly lurking in the attic? And is Molly's friend Lowry a descendant of a long line of Kroglin werewolves?

Serious young historian Molly suspects that the creepy legends about her tourist town of Howlfair are starting to come true. But when her mother bans her from doing any further research, bookworm Molly and her friends - Lowry and guardian-cat Gabriel - become covert monster-hunters to keep Howlfair safe. It seems that someone is secretly trying to summon Howlfair's mythical monsters, and with the election of a new town mayor looming, everything – and everyone – is becoming increasingly suspicious...

The Ghouls of Howlfair is so good!

Really creepy, atmospheric and dark, with fantastic characters, but what really makes it stand out is
Nick Tomlinson's use of language, twisting words and making them mean what he wants them to. There's a beautiful, lyrical quality to the writing, with adjectives being used in ways you just wouldn't expect them to be used, which contributes to the definite sense of unease throughout the book, the feeling that things just aren't right or normal. It really works very well, and the prose flows easily. It's never jarring, just unsettling and interesting.

It's funny too, often making me laugh out loud, before throwing our protagonists into another terrifying situation. And how gorgeous is that cover, by Kim Geyer?

The characters are great, Molly is a fantastic protagonist, and I loved how her clumsiness was portrayed, and I really want another book to explore more of Lowry's werewolf theories. That was a really intriguing little subplot. Gabriel is one of the finest cat characters you'll come across in a book too, he's just brilliant and another little mystery I want to learn more about.


The feeling of peril is very real, the villains are suitably horrifying and the book as a whole is very satisfying, though it definitely left me wanting more! There are so many little details threaded through about this strange town that I just want to explore it more and more! So much potential for this to be an extended series.


The Ghouls of Howlfair is out now, from Walker Books.