Hi, I'm going to do a joint review of this trilogy, because most of what I want to talk about runs through the three novels.

The trilogy consists of:


Joe Abercrombie has a new book out now, A Little Hatred, which is the start of a new trilogy,three stand-alone books that sound fascinating, and a collection of short stories, all of them set in the same world, but I haven't read them yet.

Say one thing for Joe Abercrombie, say that he writes great books. 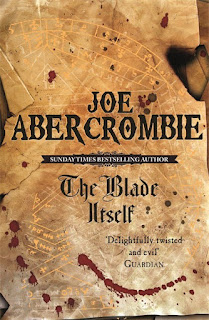 It's been a while since I last read some epic fantasy, and on the basis of a short story of his from the Rogues anthology I booked a ticket to see Abercrombie at Waterstones Newcastle. I decided to pick up the box set of his first trilogy rather than the new book they were promoting. Unusually for me, I then read straight through the entire trilogy with barely a break. I loved them!

So, the setting. The world of the First Law is centred upon an empire, with an old, rather mad king and a couple of fairly useless heirs. There was magic but it's pretty much all gone now. In the north you have rough, uncivilised clans of savages, who are uniting around an aggressive new king. Further afield you have another great empire looking to expand. Nothing too startling or unusual about any of that, though it is done well. Surprisingly there are no maps in the books, but they never really felt necessary. 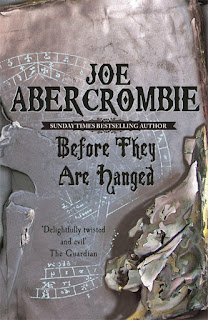 It's with the characters that the First Law trilogy really excels. Joe Abercrombie has a remarkable ability to make us care about the most unsympathetic-seeming characters. Logen Ninefingers is a northern barbarian with a legendary, blood-soaked past. He's not just rough, tough and uncultured, he's an absolute killing machine. Captain Jezel dan Luther is a spoilt nobleman, who's had every success handed to him. He gambles and womanizes, he's spoilt, self-centred and vain. Inquisitor Glotka is a malformed torturer with no moral centre other than his own advancement (or continued survival).

And yet... and yet somehow I wanted them to succeed. I was rooting for Logen to come through every fight, for Jezel to somehow better himself, for Glotka to survive the political machinations all around him. It's not just the main characters either. Abercrombie can drop someone in for just a handful of pages and yet they feel like a fully-rounded character. A lot of the supporting cast had their own excellent story arcs, particularly Colonel West and his sister Ardee (who I absolutely adore), and the motley band of northmen. 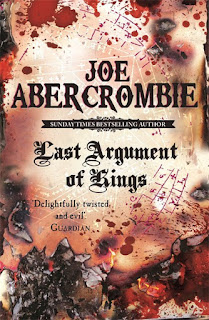 The story works so well across the trilogy. The first book brings the main characters together, the second sends them out on a couple of different quests and everything comes together in dramatic fashion in the closing volume.

The tone is excellent. It's bloody, but never too dour or serious. There's a lightly humorous tone to a lot of it that makes all the torture and warfare easier to take. It's decidedly adult too. As well as often graphic violence there are scenes of a sexual nature, (ahh, Ardee West 😍)

The three stand-alone novels apparently feature some of the same characters, but for tone they draw inspiration from very different styles, gangsters, war movies and the wild west. I'm definitely planning on reading them very soon!