Blog Tour - I Looked Away by Jane Corry

Blog Tour Review - I Looked Away by Jane Corry 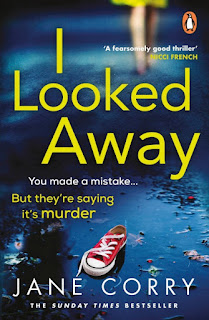 Every Monday, 49-year-old Ellie looks after her grandson Josh. She loves him more than anyone else in the world. The only thing that can mar her happiness is her husband's affair. But he swears it's over now, and Ellie has decided to be thankful for what she's got.
Then one day, while she's looking after Josh, her husband gets a call from that woman. And just for a moment, Ellie takes her eyes off her grandson. What happens next will change her life forever.
Because Ellie is hiding something in her past.
And what looks like an accident could start to look like murder...

I Looked Away is a fascinating psychological thriller, with a really interesting and different approach to story telling.

It opens with the incident referred to in the book's blurb, with something happening to Ellie's young grandson Josh when she takes her eyes off him for a few moments in her garden. But while most crime thrillers would follow straight on from this incident, I Looked Away takes a big step sideways and it is only late in the book that we come back to that fateful day.

The story unfolds through two different narrators. Ellie is in prison, telling the story of her past, from her early childhood to more recent events.  Mixed through her story is the story of Jo, a homeless woman on the run from something unspecified. Additional short passages tell us more about each woman's tragic history.

Their stories are fascinating. Emotional abuse and coercive control is a major theme, and it is handled really well, showing how insidious and destructive it can be. This is something I most enjoyed about the book, and the way the book shows the psychological harm that controlling people can do was really moving.

Jo's experiences living on the streets are powerful and affecting, showing us some of the dangers and hardships she faces and the mental impact it has on her, such that even when things start going well for her she is unable to accept it and forces herself to move on.

The narrative structure is a very interesting one. Ellie's story is told across several different narrative threads, her early life before an "accident" that is referred to a lot in rather vague terms forms part one of the book, her life after the accident up to the current time is told in part two, and then the day of the accident is told in a series of short passages used like chapter headings in part two. Jo's past is also briefly covered in similar short passages heading her POV chapters.

Throughout the book, this is used to build tension. We know something major happened to Ellie, but until near the end of the book we don't know exactly what happened. What we see is the build-up to it, the pressures and abuse she is subjected to, and we see some of the consequences of it as we follow her later life. Similarly, we know something happens regarding her grandson right at the start of the book but the details are hidden until near the end. We also don't know how Jo fits into this narrative and why we're following her story too.

With all these different threads, it took me a while to get into the book, but by the time I got to the middle of the book I was pretty gripped. There were so many hints dropped about what had happened in Ellie's past that I was eager to find out what had actually happened, as one of the story threads got to a particularly fateful day and slowly described it.

I Looked Away is an ambitious psychological thriller, dealing with serious real-world issues like coercive control, gas-lighting and homelessness very effectively, and a complex story telling approach.

I was given a proof copy of I Looked Away by Penguin Random House as part of the blog tour. Be sure to check out the other people on the tour.

I Looked Away by Jane Corry is available now. 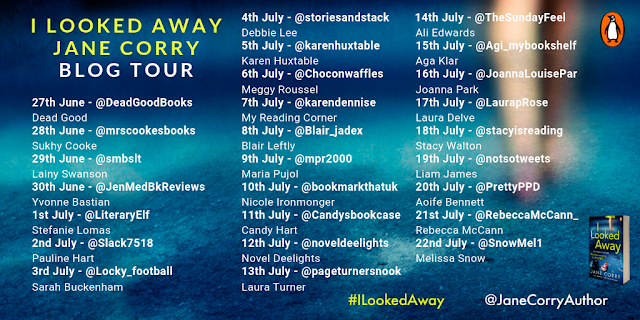