A year after the death of her older brother, Prue Haywood's family is still shattered by grief. But everything changes when a stranger arrives at the farm.

A new, incredible technology has been discovered in the city of Medlock, where a secretive guild of inventors have developed a way to capture spirits of the dead in animal-like machines, bringing them back to life.

Prue knows that the "Ghost Guild" might hold the key to bringing her brother back, so she seizes the stranger's offer to join as an apprentice. But to find her brother, she needs to find a way to get the ghost machines to remember the people they used to be.

Yet if Prue succeeds, all of society could come apart... 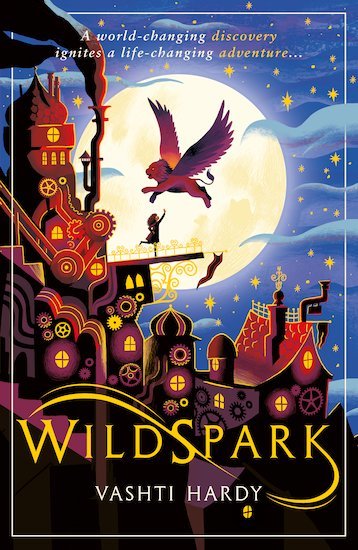 I've just finished WildSpark and what an amazing book!

First of all, it's a really exciting adventure, with peril and mystery and twists and turns and a lot of excitement mixed up with some pretty emotional bits.

Then we have the characters. Prue is just wonderful. She's brave, curious, determined, and it is always so great to see a girl who is into mechanics and engineering, because girls need STEM role models in stories. Edwin is just adorable. Cora is brilliantly odious.

But Cora's not just an unpleasant character. She has depth and reasons for why she is like she is, and by the end I'd actually warmed to her in a way. All the characters are like that, with depth and complexity driving their actions. Even the background characters, who pop up from time to time with cookies and cocoa, feel real.

The world building is just superb. From the start, when we see the mechanimals on Prue's family farm, and then following her journey to the big city of Medlock by Gigantrak, to watching her delve into the mysterious technology of the guild, it is all completely captivating, drawing you into this fantastical world and revealing it just enough to satisfy you but still leave you curious.

Finally, the overarching themes all work so well. They are all intrinsic parts of the story, nothing feels bolted on or out of place. Life and death, loss and acceptance, morality, technological progress, equality. All of them are handled sensitively.

WildSpark was interesting to read. It made me think about the issues it raises, and I'm sure it'll provoke some fascinating discussions in classrooms all around the country. But it was also exciting and definitely fun to read.

I have no hesitation in awarding WildSpark five moons.


WildSpark is Vashti's second novel after BrightStorm, and it is a stand-alone novel. It is out in May from Scholastic.

I was sent an ARC in return for an fair review.
Labels: MG review