Growing up in her sleepy Cornish village dreaming of being a writer, sixteen-year-old Lou has always wondered about the grand Cardew house which has stood empty for years. And when the owners arrive for the summer - a handsome, dashing brother and sister - Lou is quite swept off her feet and into a world of moonlit cocktail parties and glamour beyond her wildest dreams. But, as she grows closer to the Cardews, is she abandoning her own ambitions... and is there something darker lurking at the heart of the Cardew family? 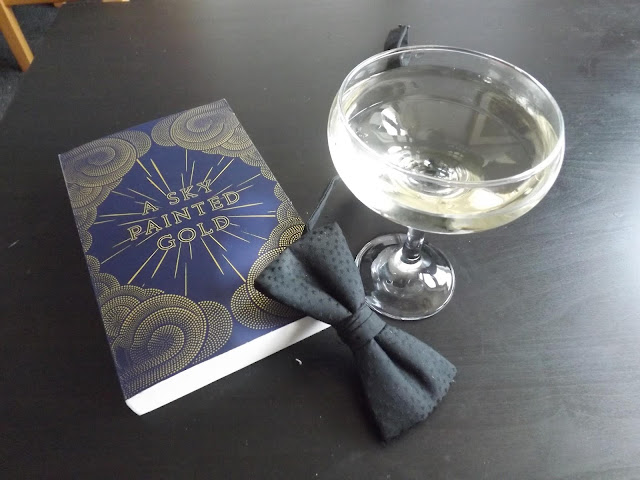 A Sky Painted Gold is utterly divine! It is magical and charming and shines inside just as much as that stunning foil cover. Like a fine glass of Champagne, it's chilled to perfection and fizzes and sparkles beautifully.

It it a twenties set coming of age story, based in a small Cornish town. Louise is looking more from her life than her sister, who gets married to the guy next door at the start of the book. There's a big, abandoned house on the island just out to sea where she likes to run away to, curl up and read. Then the Cardews return, in a whirlwind of twenties glamour and before she knows it, Louise is swept up in their lives.

Life isn't always a party though. At some point the music must end and the drinks will run dry. Louise knows that this thrilling life is just a summer escapade for her, and that at some point she must return to the quiet, settled life of her Cornish village, something she fears but accepts unwillingly. There's a melancholy to parts of A Sky Painted Gold, a feeling that behind the dancing and the parties, life isn't quite as swell as it appears. This adds beautiful layers of complexity to the novel, and it had me in tears by the end.

I loved the twenties setting. It is worked so well into the novel, a time of upheaval, the coming to an end of a golden generation, a time of division and intolerance, but with hope of change. All of this plays beautifully into the plot.

Louise is a wonderful character. She knows her place in her society, but at the same time she has her dreams, hopes and expectations. She's not willing to settle. She also copes admirably with being thrust into a totally different society from anything she is used to, and I love how assertive she can be.
Robert, too, is excellent. He has all the world-weary attitude of a young Humphrey Bogart, and like Bogey, he can really turn on the charm and the sex appeal when he chooses to. I was rooting for the two of them so strongly throughout the novel. Robert's relationship with his sister, Caitlin, is complex and beautiful too. But for me, Caitlin embodied so many of the novel's themes. She's the life of the party, the centre of the social scene, but she left me desperate to see what was behind the mask she seemed to wear, who she was when the party ended and the band packed up.

A Sky Painted Gold is an elegant, sparkling cocktail of a novel, perfect for getting giddy on a hot, summer's day.

It's one of my favourite reads of the summer, and is definitely getting five moons.

A Sky Painted Gold is published 5th July 2018 by Scholastic UK. I was given a proof copy at the Northern YA Literary Festival, in return for a fair review.
Labels: review YA