Freddie Yates likes facts. Just not the one staring him in the face – that his secret plan is not, in fact, secret.
Because Freddie's journey wasn't meant to involve Big Trev and the onion-eating competition or the loo-exploding pear-and-potato turnovers. And Freddie definitely didn't expect to end up, with his two best friends, on national television in a supergirl costume.
But journeys never take you where you think they will. And for Freddie, that fact might just have to be enough... 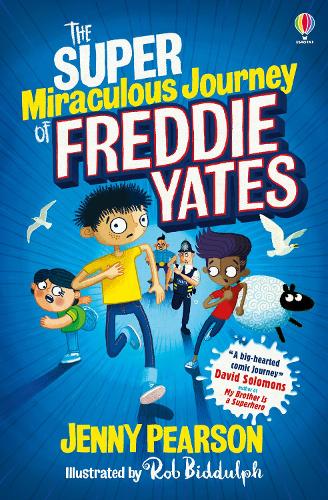 The Super Miraculous Journey of Freddie Yates was brilliant, hitting that sweet spot between funny and sensitive.
At its heart, (and it has a lot of heart!) this is a road-trip story. It has a lot in common with that genre of comedy films where a group of buddies hit the road to an unknown destination and face a variety of increasingly ridiculous encounters along the way. The big difference is that these three are young children, travelling the length (or maybe the width) of Wales to find the biological father of Freddie Yates. Along the way they face an onion eating competition, armed robbers, an abandoned church, buses, boats and bikes.
One of the genius elements of this is how ridiculous things are allowed to get, without it actually crossing that line into total fantasy. There's a logical progression to it, you can see how one mistake leads into the next, into the next, until by the end they're a long way from where they expected to be. I'm not saying it's believable, but yeah, you can see how it makes sense, sort of.
The second genius element of this is how much heart it has. It deals with grief and loss, with difficult relationships with a father who is drinking, with the sense of loss of family and not fitting it. It deals with body issues, which can be particularly cruel when a child is deemed to be too large. It deals with the difficult relationships with a stepmother and the pressure that can put on a child. It deals with all of these things and it deals with them incredibly respectfully and sensitively. It's an out-and-out comedy, but Jenny Pearson really does know when to stop laughing at her characters,
The Super Miraculous Journey of Freddie Yates is a super miraculous combination of laughs and love.
🌕🌕🌕🌕🌕
The Super Miraculous Journey of Freddie Yates by Jenny Pearson is out now, published by Usborne Publishing.
I was given a review copy via Netgalley in return for an honest review.
Labels: funny books MG review