Review - The Extraordinary Voyage of Katy Willacott by Sharon Gosling

The Extraordinary Voyage of Katy Willacott by Sharon Gosling

Living among the flowers and ferns of Kew Gardens, Katy has always dreamed of more – of the sky and the stars and the sea. Unfortunately for Katy, her father doesn’t understand. He says young girls should be content to stay at home, not go off gallivanting around the world.

So when news reaches London of a meteorite falling in the faraway land of Brazil and an expedition being put together to find it, Katy knows it’s her chance to follow her dreams and prove her father wrong. And winning a place on the trip is just the start of her extraordinary voyage on the trail of a fallen star 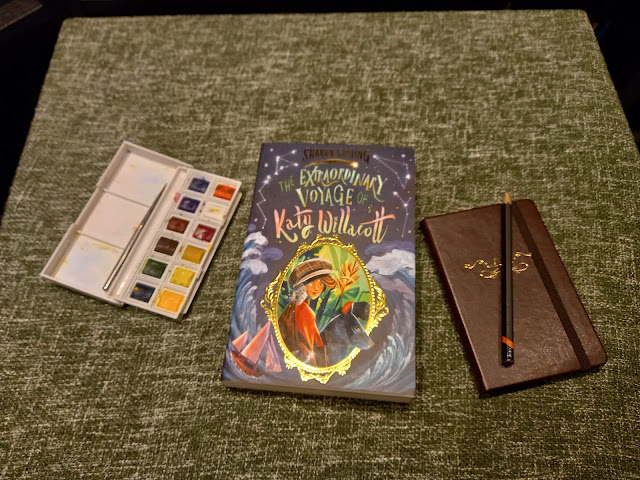 I have always been a huge fan of Sharon Gosling's writing, from her Victoriana middle grade novels, The Golden Butterfly and The House of Hidden Wonders to her more recent adult romance, The House Beneath The Cliffs. So I was very excited to receive a copy of The Extraordinary Voyage of Katy Willacott, her newest middle grade novel. And I'm very pleased to report that it did not disappoint at all. It is an extraordinary book about extraordinary women doing extraordinary things.

Like Sharon's previous middle grades, this one is set in Victorian times and there's a feminist theme to it. Katy Willacott is a young girl with grand dreams, of going off on great expeditions, finding new marvels and making a name for herself. But, like Luciana in The Golden Butterfly, she faces one great obstacle: girls aren't allowed to do that kind of thing. This is all the more frustrating for Katy because she's been trained and brought up to do it and she's good at it. Her mum is a botanist at Kew Gardens, cataloguing and storing specimens of plants from all around the world and her father is an assistant archaeologist at the British Museum. Katy's brother gets to go off on an expedition with their father, and she decides to disguise herself as a boy and run off to Southampton to join an expedition to Brazil.

Katy is a wonderful character. She's strong, determined, capable and caring. I could really feel her frustrations and share her anger at the system that tried to keep her "in her place". I loved the growth in her character too, as she learned more about the impact early scientists and collectors could have on the world around her. I wanted her to do well, and cheered her successes and bemoaned her setbacks. And there are plenty of both, as the story goes through various twists and turns, never letting you know what to expect or able to feel comfortable for any of my favourite characters.

Katy isn't the only adventurous woman in the novel though, and Fran Brocklehurst deserves a special mention. She's a wonderful adventurous journalist, and a fitting inspiration for Katy. I loved every time she appeared in the story.

One character I found myself really loving was Mary Willacott, Katy's mother. She's a beautifully depicted, complex character. It feels like Katy looks at her at times as something of a failure, an example of what Katy really doesn't want to happen to her, seeing her trapped in a fairly mundane life, cataloguing plants that other explorers track down on their own expeditions, never travelling herself, with the traditional responsibilities and burdens of being a wife and mother. But there's so much more to her than that, and I love that the story highlights both the fact that Mary is happy with those responsibilities, with her family, but also that she is herself a highly accomplished scientist with her own career. It may not be what Katy would like to imagine for herself, but for the period it is impressive and significant.

There are a lot of other important issues covered in this book. Largely concerned with the scientific need to go to remote places and bring things back to sit in a museum, it deals with the cultural theft of art that is still a controversial subject for places like the British Museum particularly, and the hunting of animals both as trophies and specimens. It deals with deforestation of our rainforests, precious ecosystems destroyed in the name of commerce and "progress", and the impact of colonialism on the native people of the forests. The Victorian age is seen as an area where we made great progress in the sciences, and its great monuments, buildings like the British Museum and the Natural History Museum are still filled with its relics. The Extraordinary Voyage of Katy Willacott examines the cost of this.

It does it in an extraordinary way though. This is a book that is filled with adventures, fun and excitement. The heroes are brave and bold. The villains are really quite horrid. There are scares and failures and there are some unexpected friendships. It really is superb.

The Extraordinary Voyage of Katy Willacott by Sharon Gosling is published on 7th July 2022 by Little Tiger.

I was given a copy in return for this honest review.