Review - STAGS by M A Bennett

Review - STAGS by M A Bennett

It is the autumn term and Greer MacDonald is struggling to settle into the sixth form at the exclusive St. Aidan the Great boarding school, known to its privileged pupils as S.T.A.G.S.

Just when she despairs of making friends Greer receives a mysterious invitation with three words embossed upon on it: huntin' shootin' fishin'. When Greer learns that the invitation is to spend the half term weekend at the country manor of Henry de Warlencourt, the most popular and wealthy boy at S.T.A.G.S., she is as surprised as she is flattered.

But when Greer joins the other chosen few at the ancient and sprawling Longcross Hall, she realises that Henry's parents are not at home; the only adults present are a cohort of eerily compliant servants.

The students are at the mercy of their capricious host, and, over the next three days, as the three bloodsports - hunting, shooting and fishing - become increasingly dark and twisted, Greer comes to the horrifying realisation that those being hunted are not wild game, but the very misfits Henry has brought with him from school... 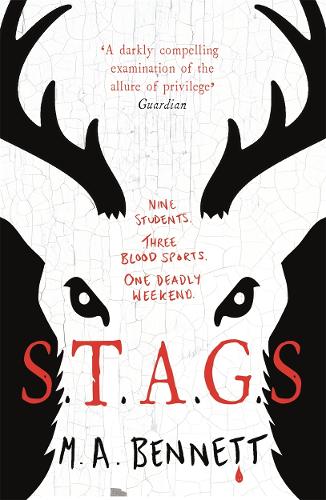 I liked the boarding school setting, it felt very gothic and really set the mood. Then the switch to the country house. Country houses are so perfect for horror stories and this vast, empty place was just oozing with a strong sense of unease from the beginning.

That uneasiness is something the book did really well. The plot unfolded nicely, though no huge surprises as what was really going on seemed quite obvious for a while. There was definitely enough to keep my on edge though, and I was enthralled.

The attention to detail was excellent. It definitely felt like MA Bennett knew the world she was talking about, with it's rigid social structure and outdated bloody hunting rituals.

A dark and compelling read.

STAGS by M A Bennett is out now, published by Bonnier Zaffre