For as long as Alex Neptune can remember, the ocean has been trying to kill him. So he's not too happy when a bunch of sea creatures drag him to the abandoned aquarium on the hill, where an imprisoned water dragon needs his help. But how can he say no to a magical myth?

Recruiting his tech-genius best friend Zoey, legend-lover Anil, a sharp-shooting octopus, four acrobatic otters and a thieving seagull, Alex plots a heist to break the dragon out. And suddenly discovers the power of the ocean at his fingertips... 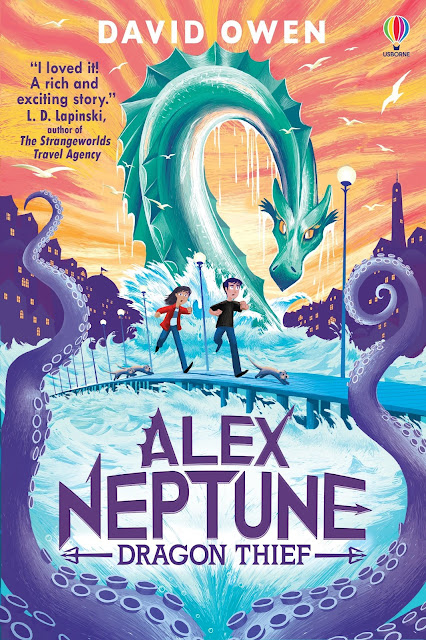 This was a really fun and exciting book, and one I enjoyed a lot.

The setting is wonderful. A decidedly strange seaside town reminiscent of Eerie on Sea, though with a charm all of its own. Much of this lies in the rich local legends, about a pirate and a dragon and their battle across the bay. It's a place full of mystery too, from lights seen in the old, abandoned aquarium to the rather sinister structure recently built on the harbour. What is poisoning the water in the bay? What is the mayor up to? Why does he have secretive guards all over the place? There's so much to delve into here.

Luckily we have a fantastic cast of characters to do that delving. I really like Alex, and his character arc as he learned more about himself, his ancestry, his powers, and finally comes to understand why the ocean keeps trying to kill him. Zoey is also fantastic, with her inventions that sometimes work but almost always have a tendency to explode. She's just so full of attitude and opinion, and was a joy to read about, especially her art versus technology conflicts with her father. Anil was also fab as the third member of the team, trying to fit in to the group despite Zoey's resistance, and I loved his firm belief in himself. The supporting cast were also excellent, I really liked Alex's grandfather with his ice cream van.

Obviously special mention has to be made of the animal characters. The otters were just adorable, the thieving seagull was very amusing, and Kraken the blue octopus was just wonderful!

There was also a serious message here, about what we're doing to our oceans, our responsibility to them and a scathing criticism of capitalist methods of fixing things for those prepared and able to pay.

I loved the way this book combined both magic and technology, to create something really interesting and unique.

Alex Neptune, Dragon Thief is a fun and exciting mystery with a fantastic cast of human and animal characters.

Alex Neptune, Dragon Thief by David Owen is out on 4th August 2022, published by Usborne.