They say the thirst of blood is like a madness - they must sate it. Even with their own kin.

On the eve of her divining, the day she'll discover her fate, seventeen-year-old Lil and her twin sister Kizzy are captured and enslaved by the cruel Boyar Valcar, taken far away from their beloved traveller community.

Forced to work in the harsh and unwelcoming castle kitchens, Lil is comforted when she meets Mira, a fellow slave who she feels drawn to in a way she doesn't understand. But she also learns about the Dragon, a mysterious and terrifying figure of myth and legend who takes girls as gifts.

They may not have had their divining day, but the girls will still discover their fate... 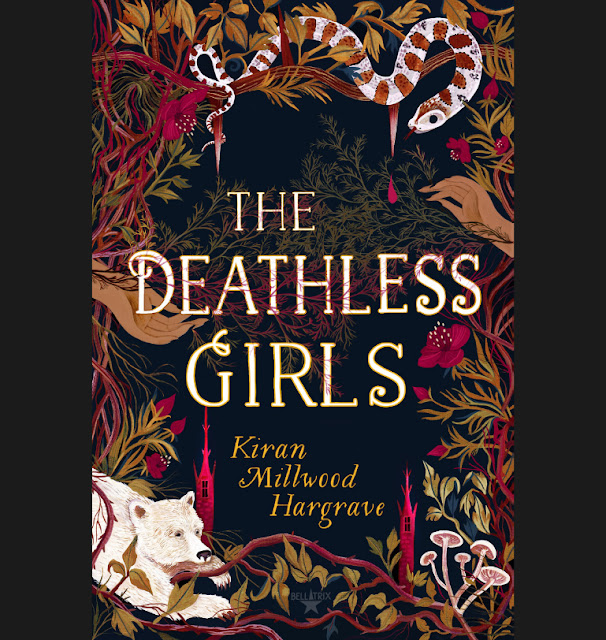 A beautiful, fierce and tender book.

The Deathless Girls is an origin story for the brides of Dracula, who I'm mainly aware of from the Coppola film wafting around and looking rather sexy without doing very much at all. I think that for the Victorian readers of Stoker's novel, they were also just there to add an additional element of shock and titillation.

Kiran Millwood Hargrave has taken these neglected characters and really fleshed them out in the most stunning way. Their story is now a story about family, about loss and hardship, about having to find your inner strength and what you are willing to sacrifice for the people you love.

It's also a beautiful and tragic love story, and that element was one of the most moving parts of the novel for me. The way it dealt with a forbidden romance was so delicate and touching.

The Deathless Girls isn't just about shining a light on neglected characters, but on a whole cultural group. Kizzie and Lil are travellers, an ethnic group so often ignored or abused, and it gives a fascinating look at some parts of their culture, their beliefs, their relationship with the land. It's a very sympathetic approach that really works well.

This isn't a Dracula story, though his shadow looms over it all. By leaving him very much in the background it allows the story to focus on the sisters, and the monsters are always scariest when we don't see them.

The Deathless Girls by Kiran Millwood Hargrave is out now, published by Hachette