Who would you trust to save the world...a boy or a billionaire?

The earth has shifted on its axis and a mysterious dark mark has appeared on the sun - the whole world is in peril! But billionaire tech genius Howard Hansom has a plan...

When Grian's sister goes missing he's convinced she has run off to Hansom's new city to help save the world. But when Grian and his two friends Jeffrey and Shelli track her there they find that nothing is quite as it seems.

Why is everything so secret? Where is the mysterious Area 13? What does Howard Hansom want with all the people he has enticed to live in his city?

The days are getting darker but what's really happening to the sun? 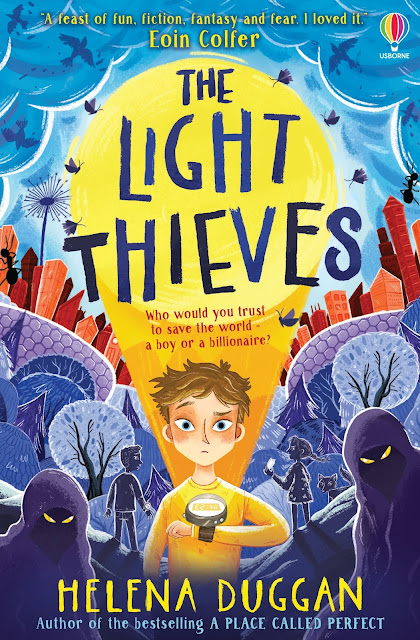 The Light Thieves is a fantastic and fascinating technological thriller!

Let's start with the mystery at the heart of the book. It's totally gripping! There are strange, cloaked figures floating around, letting themselves into people's houses, hunting people through the streets. There's a missing sister and a missing grandfather. A tech genius who's just too good to be true. It's complex and exciting and utterly mysterious.

The characters are great too. I really liked how Grian wasn't actually that bright. He struggles with a lot of things and depends on his friends for help, and that really worked for me. He had courage though, and I loved his determination to keep going. Jeffrey was a fascinating character, and one I'd like to see more of. His relationship with his parents was hinted at frequently and is definitely something I'd like to see explored in later books. Shelli was also brilliant. With her close affinity to animals and apparent powers over them, and her disdain of modern technology, she was the ideal third member of the group.

At the heart of The Light Thieves is technology and our relationship to it. This was handled really well, I thought. So much of the technology was quite recognisable, maybe just a little bit more futuristic. The themes were certainly familiar, with technological assistants learning all of our likes and dislikes, tracking our movements, coordinating with other systems on our behalf and so on. There's a really interesting debate here about the need for privacy versus the convenience of having a computer system essentially running your life for you, and valid concerns about what happens to all of that data. I'm sure this aspect of the book is something that'll only become more relevant with time as huge corporations sell us more labour-saving devices that pry on every aspect of our lives.

The Light Thieves is action packed and mysterious, with some very important things to say about our reliance on technology. I cannot wait to see where this series goes next!

The Light Thieves by Helena Duggan is out on 1st September 2022, published by Usborne.