An evening with Anna Day and Dan Smith


What a month it's been for book events!

Exactly a week after Anna Day's launch party, we were back in the basement of Waterstones Newcastle for an evening event with Anna and Dan Smith.

You can find my review of Anna's first novel, The Fandom here and of Dan's latest, Below Zero here.

The event was hosted by Steph from A Little But A Lot and a good number of  #NorthernBookBloggers were able to make it.

Here we are with Dan. 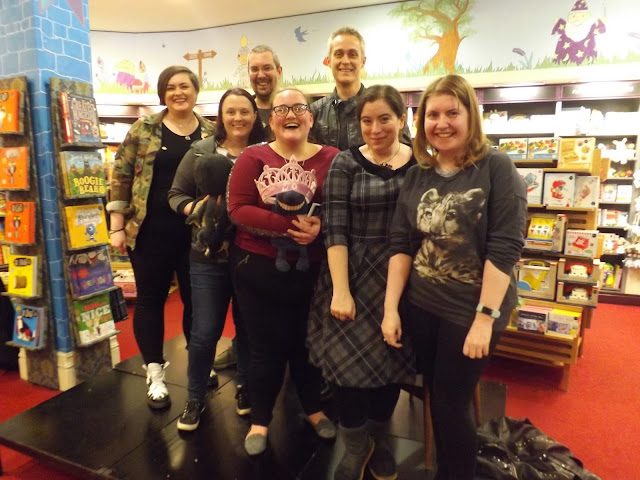 From right to left in the front row we have Aimee, Cora, Steph, Charlotte and Rebecca. Then Dan and me at the back.

It was a really interesting night, in which we learnt a lot about both of the authors.

Anna is a meticulous planner in her writing, using lots of sticky notes to plot out her novel, though she describes herself as rather more of a chaotic mess in the rest of her life.

Dan takes a very approach, and said that if you knew the ending when you started writing, it would spoil it for you because you'd know what happens. This does kinda make sense, because for me Dan's novels feel very driven by their settings and the plot evolves from there.

Neither of them have one of the infamous writer's sheds, though Dan did express his envy of Abi Elphinstone's writing shed, seen recently in her Authorfy videos. Anna has a very messy desk and Dan writes on the kitchen table.

When asked about how they motivate themselves on days when they don't really feel like writing or editing, they both seemed a little surprised by the question. "You just do it, it's your job and you want to get paid" was essentially the response from each of them, though Anna revealed that she is a binge writer, writing considerable amounts every other weekend to fit in with being a single mother with a day job.

When asked what they were currently reading, Anna told us that she was reading Below Zero, while Dan has nearly finished The Fandom.

When asked what they were currently writing, Dan told us that his next book is a childrens book. It's not the Western he wanted to write, because Westerns don't sell, but it might contain hints of Western if you go looking. Every one of his adult books is essentially a Western in some form or other, he said. Anna confirmed that she is writing something, but couldn't tell us what it is, leaving us to speculate madly on whether it is something starting with an s and ending in equel.

Dan enjoys writing gruesome things and would love to write a horror story for children. Personally I thought Below Zero was really terrifying, but I'd welcome a full blown Dan Smith MG horror! Anna put her psychologist hat on and explained to us about sublimation, which basically means that she makes really horrible things happen to her characters to get it out of her system. Something I'm sure we're all grateful for!

They both talked a lot about trusting their editors and publishers, of working with them and taking advice and not being too diva-ish about their writing, though it was interesting to hear Dan talk about how the original cover design of Below Zero didn't fit the story for him, and that he was able to get it changed.

Other highlights include Anna asking Dan what his personality type is. "Awesome" was his response, and Anna telling us that one of her earliest writing experiences was of writing Beaver Towers fanfic!

After the talk, they both signed lots of books, and there was plenty of time to chat to the authors and the other guests.

All in all, it was a fantastic evening with two lovely local authors. Big thanks to Waterstones Newcastle for being fabulous hosts as ever. I'm getting used to spending my Friday nights drinking wine in that bookshop!