Emma Nash is back….and determined to work out the world of friendships and relationships once and for all (…ish).
Now she’s in the sixth form, Emma’s expecting life to be a breeze but when her best friend Steph suddenly has a boyfriend who she’s spending more time with Emma’s not sure what to do with herself.So Emma’s got a mission in mind: making new friends. Signing up for the school fashion show seems like the perfect opportunity. Although soon, through a series of mishaps that are absolutely not Emma’s fault (well, sort of), her world is teetering on the edge of disaster again.Would going back to creating a life for herself online reaaaaaallllyyy be so bad? 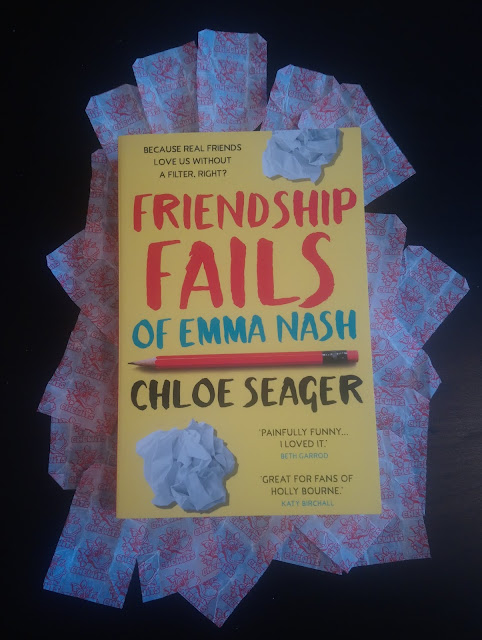 I love this book! I really enjoyed the first one, Editing Emma, and in many ways this is more of the same, but that is just what I wanted.

After Emma's unsuccessful attempts to find herself a new boyfriend in Editing Emma, she's decided to focus on friendships instead, both looking after her existing (and worryingly small) group of friends and building it up so that she's never left alone. That concern is really at the core of the novel. Steph has a boyfriend now, Faith has a girlfriend, she never made up with Gracie, and she's getting very worried about everyone growing up and moving on and leaving her behind.

Of course her plans don't go quite right. Of course they don't. Emma is still a wonderful, glorious mess. Every time she starts a blog post with the phrase "Something horrible has happened" or some variation of that, my heart leapt. One thing Chloe Seager does really, really well is make you emphasise with Emma. I really felt for her, and watching her walk into disaster after disaster was really tough. One of the other things Chloe does brilliantly is humour though, and I was laughing throughout. This is, at the end of the day, a very fun, very funny book.

The issues Emma faces are also very real though. Underneath the humour there are some really important messages, about the importance of talking to people about your problems rather than letting them lie, trying to understand that other people have their own lives and their own problems and breakdowns in friendships aren't always about what you think it is about. The cyber bullying/slut shaming parts were really powerful. Books like The Exact Opposite of Okay focus on that so well, but Friendship Fails of Emma Nash shows that it doesn't have to be a huge, publicised thing to have an impact. A couple of small comments by an anonymous dick on a blog post can have a huge impact on someone's self-esteem and confidence.

A wonderful book that I enjoyed immensely. Five moons.