It's time for another joint review, as my daughter and I review book three in the Wells and Wong series, First  Class Murder.


Daisy Wells and Hazel Wong are taking a holiday on the world-famous Orient Express - and it's clear that each of their fellow first-class passengers has something to hide.

Even more intriguing: there is rumour of a spy in their midst.

Then, during dinner, there is a scream from inside one of the cabins. When the door is broken down, a passenger is found murdered, her stunning ruby necklace gone.

But the killer has vanished - as if into thin air.

Daisy and Hazel are faced with their first ever locked-room mystery - and with competition from several other sleuths, who are just as determined to crack the case. 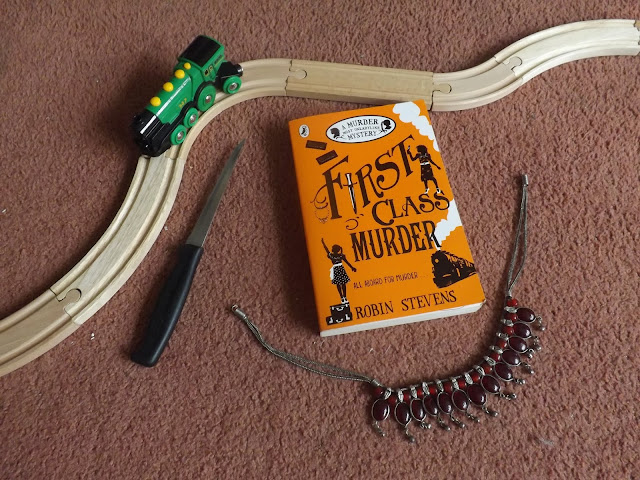 Absolutely fab! Love how it is based on Agatha Christie's 'Murder on the Orient Express'.
These stories just seem to be getting better with each book! The cast of characters on the Orient Express is absolutely fascinating, there are so many people who seem to be out to get each other and it's really exciting to watch it all happen within the closed environment of a train carriage.  The use of a magician on board, and the possibility of one of the characters being a spy reminded me of the fact that Houdini himself acted as a spy, and it's great to see characters from Arsenic for Tea come back into the story in very different roles.

Alexander is a really interesting addition to the team, and I really enjoyed the way he challenged Daisy. It was also interesting to see Hazel's father, who we've heard about before. It was a great additional challenge for the detectives to have to do their detecting without his catching on.

Did you work out who the murderer was?
Yes, but only a few chapters before they were revealed. Very exciting!

This is the first time so far that I've managed to figure it out, and that left me feeling quite pleased with myself because it was very cleverly done.

What was your favourite bit?
At the very beginning, when Hazel's father comes to pick up the girls are, outside Deapdean

with their friends, who are also waiting to be picked up
"Goodness," exclaimed Beanie, eyes wide." Is that your father? How funny- he looks exactly like you!"
"Beans," said Kitty, rolling her eyes, "who else would he look like?"
"I don't know!" said Beanie."I mean-does everyone in Hong Kong look like you, Hazel?"

I loved watching Daisy have to cope with so many other detectives, amateur and professional, young and old, on board, and watching her competitive streak come out. I also really enjoy seeing which books Daisy is reading, as she has such excellent taste in classic murder mysteries.

I am! One of my best friends has asked to borrow the books from me to read.


Are you looking forward to reading the next in the series?
Definitely! I can't wait for book 7 to come out!