Arsenic for Tea by Robin Stevens


It's been a little while since I posted any reviews here, so today my daughter and I are catching up with reviewing our favourite series, Robin Stevens' Wells and Wong mysteries. Here's book two in the series, Arsenic for Tea.


Schoolgirl detectives Daisy Wells and Hazel Wong are at Daisy's home, Fallingford, for the holidays.
Daisy's glamorous mother is throwing a tea party for Daisy's birthday, and the whole family is invited, from eccentric Aunt Saskia to dashing Uncle Felix.

But it soon becomes clear that this party isn't really about Daisy at all. Naturally, Daisy is furious.

Then one of their party falls seriously, mysteriously ill - and everything points to poison.

With wild storms preventing anyone from leaving, or the police from arriving, Fallingford suddenly feels like a very dangerous place to be.
Not a single person present is what they seem - and everyone has a secret or two.
And when someone very close to Daisy looks suspicious, the Detective Society must do everything they can to reveal the truth . . . no matter the consequences. 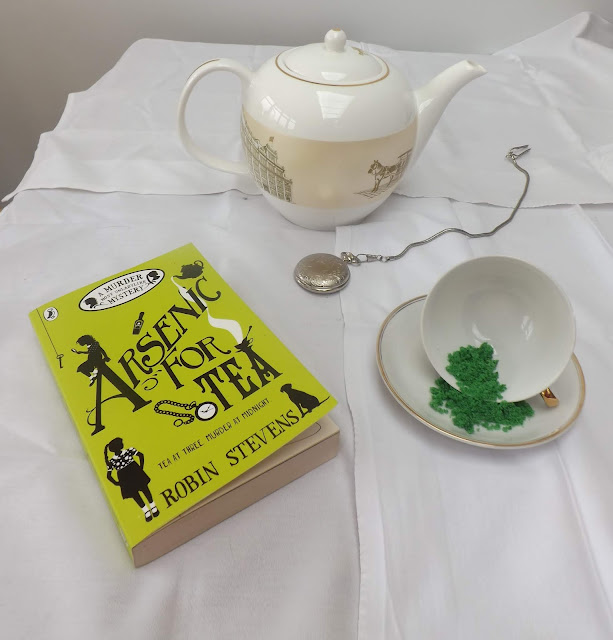 It's a great book. The fact that it was set in an old, big house (Fallingford) realy added suspense. I also like how with it being in Daisy's home meant many suspects were her family, which meant they had to stick to the truth, and not follow love. It was great to see more of Kitty and Beanie (their friends) as well.
I really enjoyed it too. After Murder Most Unladylike, it felt like this took the series in a new direction, by leaving Deepdean school, and it gave us a lot more background on the Honourable Daisy Wells.

It would have to be either Hazel, Kitty or Beanie. Hazel really thinks about people for who they are, and worries about them. Kitty is quite 'no nonsense' and straight to the point. She also watches out for Beanie, which is kind of her. Beanie can get quite worked up about things and gets very worried about people when they are in danger.

Uncle Felix is a very intriguing and interesting character. He's left me really wanting to know more about him and just what his work is. I also think Beanie is incredibly sweet and I had a lot of sympathy for her.

No, it was very unexpected and a good twist.
Nope, this one kept us both guessing right until the very end. I did manage to figure out what one of the other characters was up to quite early on, which I was rather pleased about, but the murderer would have escaped me.

Daisy's father greeting her and Hazel, "Daughter, Daughter's friend." This is something we've copied ourselves a few times now.
I liked that part and how he couldn't remember that he had met Hazel, even though she had been at Christmas. I also like the bit when Aunt Saskia shouts really loudly 'There seems to be AN ORIENTAL in your hall!' because it is very funny
This is a great example of how these stories often use humour to show the discrimination that Hazel faces.

Like we said last time, reading it aloud makes it funnier, because you can make the different voices.
Definitely. I love the fact that my daughter is now easily confident enough to read these books on her own, but we still read them together just because we enjoy doing so, so much.

I am. My Mam and brother are reading them now.
I've been happily recommending it and the rest of the series to everyone.

Are you looking forward to reading the next in the series?
Desperate to get them all read! Super exciting.
We're already on to book four, and racing through the series!
Another excellent installment in the series. We're giving Arsenic for Tea five moons.
🌕🌕🌕🌕🌕