Good afternoon, and welcome to the Book Worm Hole.

Today I am thrilled to be part of the Write Reads Ultimate Blog Tour for Karen M. McManus' new thriller, The Cousins.

I am a huge fan of Karen's novels, from her first thriller, One of Us is Lying,  and you can find previous reviews of her books here and here, along with an interview with the author I did back in April, here.

The Cousins is a stand-alone thriller, unlike her last book, One of Us is Next. It's also a bit of a departure from her Bayview books in that it isn't high school focused. The mystery here all takes place on a small island off New England, which has been turned into a resort and playground for the rich and famous.

Rather than a close group of friends, or high school acquaintances, the three central characters here are family, cousins in fact. However this doesn't meant that they're close. At the start of the book they really don't know each other at all, other than vague recollections of long ago family gatherings. This is essentially a thriller mystery about family histories and relationships. There are secrets buried deep in the past, not spoken of by siblings who've grown distant and apart. As the cover of the proof reads, "You Know What You Did." Unfortunately, neither the main POV characters or the reader does for most of the book.

I absolutely loved the central mystery in this novel. It unfolded perfectly, giving out little hints and clues as I read through, so that I could feel it coming together but not quite make out the total shape of it. Then it all suddenly came together in a climatic finale in a very satisfying way. It's one of those perfectly paced thrillers, for me, where I figure it out just seconds before the characters do.

The characters are also excellent. Karen is a master at pulling off multiple points of view stories, and it is so clever how she does it while managing to conceal secrets those characters have from the reader. Somehow it never felt like we were being lied to, but there were distinct layers to be peeled away before we got the full story. There are really strong themes and issues in there too, most particularly around parental respect and approval, as well as the harmful and long-lasting damage of secrets and lies, and the importance of forgiveness, where appropriate. Some of the characters were really lovely and worked their way into my heart, others were just the absolute worst! On the technical side, I was particularly impressed with how well Karen wove together first and third person perspectives, to subtly distinguish between the current day setting of the three cousins and a historic perspective that wove its way through the main narrative.

My one complaint is that reading this made me feel old! Specifically, there's one reference to a character's mother enjoying the 90s grunge music she listened to in college, and another about Empire Records being someone's parent's favourite movie. That was just mean!

This aside, The Cousins is another outstanding mystery from the queen of the YA thriller!

The Cousins is available now from Penguin Random House. I was given a proof for review purposes as part of The Write Reads blog tour.

Make sure to check out the rest of the Ultimate Blog Tour, organised by The Write Reads! 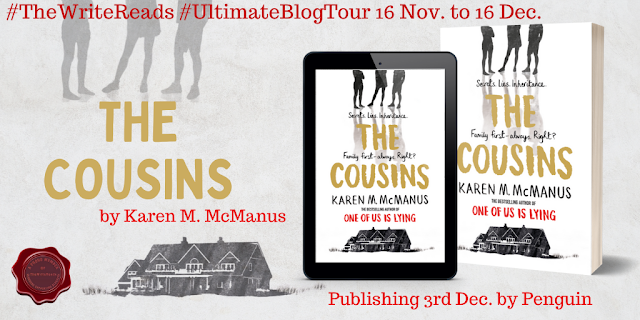