Review - A Snowfall of Silver

A Snowfall of Silver by Laura Wood 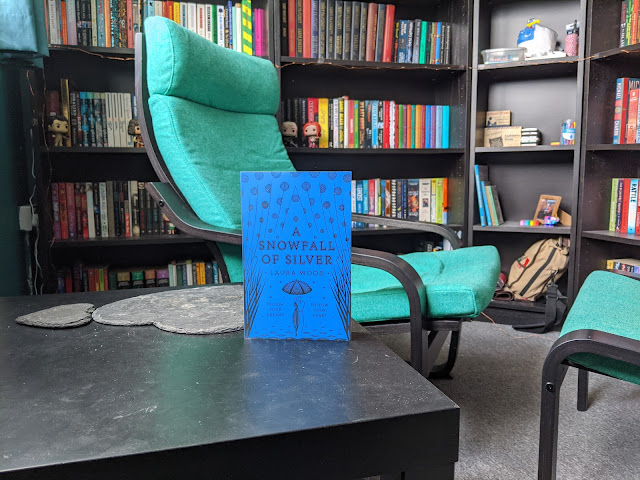 In the Autumn of 1931, eighteen-year-old Freya Trevelyan runs away from her home in Cornwall to follow her dream of becoming an actress. When she is invited to join a theatrical company about to head out on tour, Freya thinks the path to success is clear, and, amidst all the glamour and bustle of stage life, she finds - for the first time - a place to belong. But can reality ever live up to her expectations? What if her life - and falling in love - turn out to be nothing like she planned? An enchanting coming of age romance about following your dreams - even when they aren't quite what you expected.

I knew I'd love A Snowfall of Silver, because it's Laura Wood! And because it is a follow up to her stunningly beautiful Cornish romance, A Sky Painted Gold, and because Laura's last YA was Under a Dancing Star which was one of my favourite books of 2019 and also of all time. But I had no idea going in just how much I would love A Snowfall of Silver.

I loved it a lot!

Okay, so it wasn't the book I was expecting when it was introduced at the Scholastic blogger brunch in February. I was expecting a straight sequel to A Sky Painted Gold. That's not really what this is. We do get to see a bit of what has happened to Lou and Robert, the couple at the heart of that first book, and it is a real treat to check in on them again and see how their happily ever after is going, but they're not the focus of this story. This actually works really well, because honestly they deserve their happily ever after. No, the focus of this story is Lou's little sister, Freya.

Freya is outstandingly brilliant, and from the very start I loved her so much, and that love just grew and grew throughout the novel. She dreams of being a great actress on the stage, and directs her own life as if it's a dramatic story, right down to her costume choice when she dramatically runs away from her small Cornish village to London. Sure, she could have asked permission and probably would have received it, but where would the drama be in that? That's one of the core elements of Freya's personality, this need to see herself as the central character in her own story, and it works really well. The fact that she is a central character in a story would probably thrill her, but that element of meta narrative is, thankfully, never used.

What I love about Freya's personality, and what is so terribly clever about Laura's writing, is that she is unashamedly ambitious. Freya knows what she wants and she knows that she's good at it and she's determined to go out there and get it. This ambition is never seen as a bad thing, it's never presented as a personality flaw. Instead she is a shining role model for young girls in particular, and anyone else in general, that it is absolutely fine to believe in your own abilities and to go after what you want.

Also, Freya eats, a lot, and again this is never once presented as a problem or a flaw. She takes great pleasure in all manner of foods, and if you can get through the novel without desiring bread with honey, jam tarts and mince pies then you're doing better than me! There's no shaming of her at all, and that is really refreshing to see. There's a reference towards the end, and may be a couple more, to her being a bit rounder than another actress but it's purely concerned with altering the theatre clothing and never seen as being a problem.

There are other societal elements addressed quietly and subtly throughout, including homosexuality and racism. This isn't an "issues" book, but it doesn't shy away from acknowledging these issues either, and I felt that it presented a fair view of how these would have impacted on theatre life at the time.

At the core of A Snowfall of Silver is the theatre, and it is brilliantly done. Each of the different theatres in the novel has its own feel and character.  I love the many references to Oscar Wilde's an Importance of Being Earnest too. Like with Under a Dancing Star, Laura Wood is able to effortlessly weave classics into her own writing, and it's done in such a way that it'll thrill any Wilde fans without leaving anyone who doesn't know the play confused. (But if you don't know it, I recommend watching the Judy Dench, Reese Witherspoon film version.)

I won't say too much about the ending, for fear of spoilers, but it is perfect. Laura Wood delivers what is, for me, one of the finest romantic moments I've read, through a patient build up and an understanding of what truly matters in love. For anyone sick of the toxic relationships so often presented as being romantic, this is the perfect antidote. And as with her middle grade novel, Vote for Effie, Laura shows us that sometimes the fairytale endings aren't the ones we really need to see.

A Snowfall of Silver is outstanding, romantic, hilarious, and beautiful. Its heroine, Freya, is a character to be cherished and adored, perfect because of her imperfections.

A definite five moons, for one of my books of the year.

A Snowfall of Silver is published today, 1st October, from Scholastic. I was sent an early review copy in exchange for this honest review.