Review - I Was Born for This by Alice Oseman


I Was Born for This by Alice Oseman.

For Angel Rahimi life is about one thing: The Ark - a pop-rock trio of teenage boys who are taking the world by storm.

Being part of The Ark's fandom has given her everything she loves - her friend Juliet, her dreams, her place in the world.

Jimmy Kaga-Ricci owes everything to The Ark. He's their frontman - and playing in a band with his mates is all he ever dreamed of doing.

But dreams don't always turn out the way you think and when Jimmy and Angel are unexpectedly thrust together, they find out how strange and surprising facing up to reality can be. 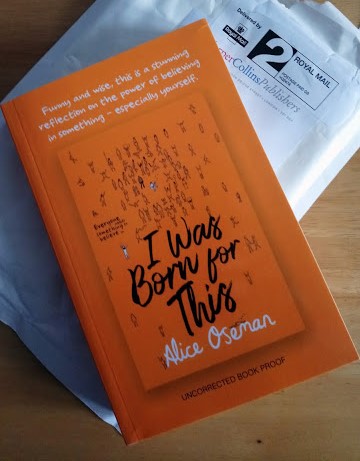 Wow, there's so much packed into this excellent novel about fame and fandoms.

Let's start with the diversity, because there's a lot of it here, and it's presented amazingly well. Angel Rahimi is a Muslim. There are regular references to her observing prayer times, she doesn't drink, she wears a hajib. But this isn't a story about a Muslim teenager, it's a story about a teenager who is a Muslim. It's part of her story, but it doesn't define her. She also presents as asexual and aromantic, without the need to ever make this explicit. It just feels like another aspect of her character.

There is a bisexual character who don't sleep around all the time, a transexual character who is accepted for who he is and a rock star who picks out a dress to wear on stage at a major awards ceremony because he thinks it's a cool outfit. It's all presented as perfectly acceptable and totally accepted and it's brilliant. It never feels forced or just there for the sake of it either. It genuinely feels like Alice is presenting a snapshot of a community who are comfortable with their diversity.

Then there's friendship. Internet friends are real friends. This is a truth sometimes forgotten, sometimes ignored. I Was Born for This explores this idea in depth in Angel's story, from the fact that we find ourselves telling our internet friends so much more about ourselves than we do to the people we know in 'the real world', to the thrill and terror of actually meeting up with internet friends in real life, the nervousness, the familiarity, the second-guessing. It explores what matters about friendships and a lot of the good and the bad that come with them. The Ark show a different side to friendship, three friends who have grown up together and become famous together, and the stresses and strains that puts on their relationships.

Fandoms are a major part of this story. Angel defines herself for much of the novel through her love of The Ark and Jimmy in particular. Through her story arc we get to see why her fandom is such a major part of her, what it means for her and her hopes and dreams, the impact it has on her relationships, with her parents and with her friends. We also find out what happens when we meet our heroes.

Through Jimmy's eyes we see the fandom from a whole other angle. For him, the fans are an often terrifying presence all around him, watching him, judging him, hungry for him. Flipping between the two points of view gives a really interesting view of this world.

There's a lot here about mental health too, particularly anxiety. It's really interesting to see someone who appears to have everything they could have dreamed of struggling so much with anxiety and a good reminder that you can never judge what is going on inside someone's head by the way they act.

I Was Born for This is a funny, fascinating novel with some amazing characters. The fact that it folds so much into a fast paced narrative is exceptional.


I was sent a copy of I Was Born for This by HarperCollins Children's Books in return for an honest review.
It is published on 3rd May 2018.