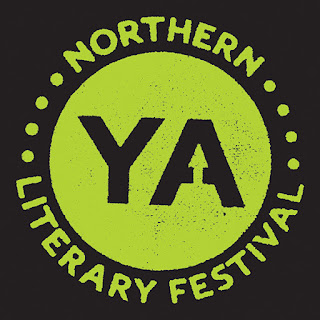 The First Northern YA Literary Festival finally happened! After several months of getting excited about it, last Saturday, 24th March, I packed a suitcase full of books and took an early train out of Newcastle.

Hannah and Aimee joined me at Durham and Kelly joined us at Darlington. We got seats together around a table and settled down with our respective books until we reached Preston just before eleven. We got to the venue, 53 Degrees, slightly after 11am, the time of the first panel, but they hadn't actually started yet. We hurried down to our reserved seats in the front row just in time! 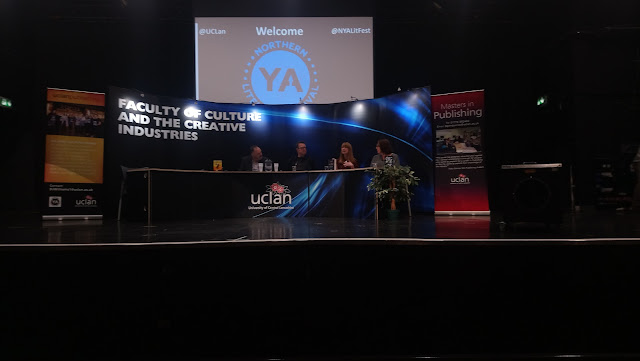 The first point they made was that the biggest publishers use agents, as gatekeepers to filter submissions for them essentially. Smaller publishers don't use agents, or rather they don't expect their authors to.

Each author then talked about their own route into publishing. Teri Terry's first novel, Slated, was published in 2012. She'd already written nine novels by then. She went through an agent, went through auction and ended up choosing Orchard Books, part of Hachette.

Anna Day entered a book in the Times Chicken House competition and got shortlisted. Chicken House then matched her up with something that had been submitted in their Big Idea competition. (There's a lot more detail on that in my interview with Anna).

Philip Caveney was first published in 1977. When his rock band moved from North Wales to London he found the address of an agent, went into their office and dumped his manuscript on a desk and left before anyone could look at it. His third manuscript sold.

One statistic given out is that on average, authors write four books before getting one published! The panel then switched to more of a questions and answers format, that I'll now attempt to copy!

What was the book that got you into wanting to be a writer?

PC - Something Wicked This Way Comes by Ray Bradbury, at thirteen years old. This led to writing short stories for the other kids in his dorm.

AD - The Hunger Games, in her early thirties.

TT -  Teri talked for a while here about how as a seventeen year old, she didn't feel like becoming an author was really achieveable. She went to university and wrote in the background. Then she moved to England, found someone with the perfect surname for her to marry and needed to decide what to do next. That was when she decided to start writing seriously, and started writing before work. She then asked what the question had been and told us that the books she read growing up were sci-fi and fantasy, such as Lord of the Rings and Dune.

The accessibility of the publishing world

TT - You don't need to study creative writing to be a writer. The barriers are more perceived than anything else. It's about having the confidence.

PC - Hasn't used an agent for a while. He tends to fall out with them. He is a big believer in writing groups, and in getting good constructive criticism.

AD - She doesn't have an agent. She gets advised by her editor.

PC - Editors have distance and perspective. They are usually right. Every time you rewrite something it gets better.
They all agreed that they sometimes disagree with editors' suggestions at first, only to accept that the editor is right in the end.

How long did your first book take from editor's desk to shelves?

PC - He usually suggests a cover image. His illustrator will send rough ideas.
AD - People who saw the original cover of The Fandom, which split the word Fandom across two lines, thought it was about a fan called Dom!
TT - The cover of Evolution is orange. She didn't have a lot of input, other than being given a choice between two different cover styles.

In YA is the blogging community huge?

TT - Yes! Look how many are here today! It's interesting to get feedback. Publishers see them as really important, particularly to get the early word out and generate buzz.

PC - 9am-4pm ish. He aims to write at least a chapter. Three months for a first draft. Emphasised the importance of reading your work aloud.

AD - She binge writes every other weekend. She has to be really organised to manage a two week gap in writing.

TT - She gets up really early with her puppy and writes while the puppy naps. It helps her focus.

Do you read while writing? What are you reading?

PC - All writers start as readers. Skinful of Shadows by Frances Hardinge.

AD - Finished Below Zero by Dan Smith. Reading State of Sorrow by Melinda Salisbury. Has to hide books while she's writing, but she's just submitted a second draft so she can binge read.

TT - She has a book due at the end of March and plans to binge read in April, but has snuck in a few chapters of Things a Bright Girl Can Do by Sally Nicholls.

What are you writing now?

PC - Just finished two books, one by Danny Weston, one by Philip Caveney. Both set in Scotland.

(Unfortunately, although both Anna Day and Teri Terry answered this question, I can't tell you what they said!)


Do you find yourself writing down for YA?

(There was an audible gasp from pretty much the whole room when this question was asked!)

TT - She stated that she covers some fairly tricky philosophical and scientific subjects.

Is there a risk of cliche in YA?

TT - There are cliches, like the love triangle romance, but sometimes it is important to the story.

AD - She finds a lot of the tropes interesting, even comforting, but it can be important to put a different twist on them.

Is independent publishing a help or a hindrance?

PC - It's different in every case. You're going to take any opportunity you get. Writers want to be published. You don't get enough control to be fussy.


AD - Getting published is amazing. Take whatever you get offered.

TT - You only have one chance to get published for the first time, and it is important to make sure it's right.

TT - Read aloud. Get someone else to read it.

PC - It needs to be proofed properly. Spelling and grammar is very important!

Writing in a different style

PC - What makes a book your own is your voice. He writes under Danny Weston and Philip Caveney and a third, undisclosed, name, to maintain that writers voice.

AD - It's probably easier for YA writers who want to move genres within YA.

TT - Every book has a different voice for her, every character. But a publisher might rather you use a different name to not confuse the audience if you are going to write something widely different.

This was a really interesting panel, with loads of great tips on writing, editing and publishing, from three very interesting authors with often quite different viewpoints.