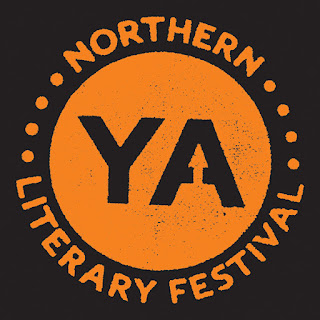 This is the third installment in my Northern YA Literary Festival round up. The third event of the day was Alwyn Hamilton in conversation with Samantha Shannon. I've just finished the first part of Alwyn's Rebel trilogy, Rebel of the Sands and it's amazing. It's Wild West adventure meets Arabian Nights magic. I've also just read the first installment in Samantha Shannon's seven part Bone Season series, and that's also really good, with a Victoriana aesthetic applied to a sci-fi dystopian story about clairvoyance. 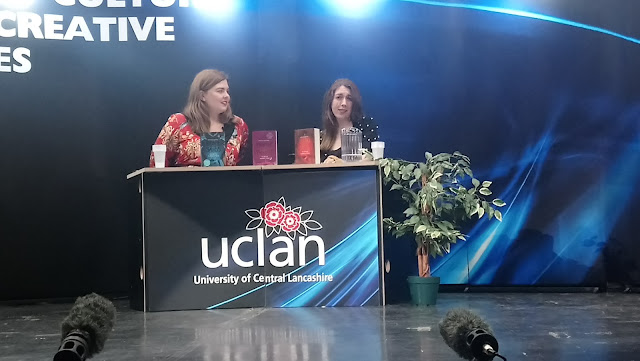 AH - It felt really satisfying to complete the trilogy. There's a lot of pressure on writing, you need practice to get good at it. I'd written six series starters before Rebel of the Sands, but I hadn't written a book two or a book three. I learnt by writing them.

SS - Do you have a favourite?
AH - Traitor (to the Throne). It was the first book I had to write to a deadline. It was interesting exploriting the rest of the world. It was satisfying editing it and submitting it and then editing it with the publisher.
Hero (at the Fall) was more stressful, pulling it to a conclusion.

AH - In Rebel, the solutions to problems was often to move the character somewhere else. Traitor was more claustrophobic, they were trapped and had to deal with problems.

SS - Does the finished series look how you thought it would?
AH - It started as a standalone work. 50k words into it they were still crossing the desert. But I always knew the end point. The conclusion of Hero was always in my mind. I've been waiting 5 years to write the epilogue.

Titles
AH - I'm the worst person at titling. It was called Wild West Arabian Nights for a long time while writing it. Then it went through a long list of titles.  "Too boring." "Too hard to spell."
Traitor got stuck on the "of the" part of the title. Hero did too. But it was always Rebel, Traitor, Hero.
SS - I've got stuck in an awful patter. It has to be 4 letters followed by a two syllable noun!

SS - Was it difficult to write a protaganist who is a supporting character in someone else's story?
AH - It made it easier to write secondary characters. Many of the side characters could have their own series. It doesn't revolve around the main character, but I don't get to share their stories like I'd want.

SS - Who is your favourite character?
AH - Shazad.
SS - The series for me is called Shazad.
AH - My agent actually said that she wouldn't represent me any more if Shazad was killed off in book one!
AH - Shazad would be hard to write as a main character because she's so intelligent and competent. Any problems she faced, she'd just take care of too quickly.
AH - I didn't stick too strictly to Eastern mythology. I wanted to put Wild West tropes in, that gave me some set pieces, like the train, and made it easier.

We then had questions from the audience, and my notes get even more confusing and disjointed!

AH - The books make sense as a trilogy. In some way every trilogy is Star Wars, following the same basic structure.

AH - I'd love to explore the world more, but these characters' stories ended.

AH - I wrote short stories for the launch but I'm not sure if they'll ever be published. They weren't written under contract and Iwasn't paid for them.

AH - I have a degree in French pre-Revolutionary Art History and worked in Islamix Art sales. Both of these are used in the books, with the French revolution as an influence.

Favourite trope?
AH - The Fake Out Make Out.

Hero research
AH - Ships are a lot more complicated than I thought. My mother knows a pirate expert who was fired from the film Cutthroat Island for giving them too many facts. I emailed him. How would someone steal a ship if there was also magic? If you were to use magic, could you sail a ship through sand?

On asking an editor for advice
"Do it and I'll tell you if it works. I can't edit you psychically."


More than anything else, this panel made me want to read Traitor to the Throne! It was really interesting listening to Alwyn, and Samantha Shannon worked really well with her.