Contagion and Deception, books one and two of the Dark Matter trilogy by Teri Terry.

Contagion
Callie is missing.
Her brother Kai is losing hope of ever seeing her again. Then he meets Shay, a girl who saw Callie the day she disappeared, and his hope is reignited.
Their search leads them to the heart of a terrifying epidemic that is raging through the country.
Can Kai and Shay escape death and find Callie?
Deception
EPIDEMICCause: unknownTreatment: noneFatality rate: 95%Survivors pose a risk to public health. REPORT THEM NOW!
Shay, a survivor, believes she was to blame for the epidemic. She tricked Kai, abandoned him, and turned herself in. But Kai can't let her go...
Shay, I will find you. And then? What then? Then can wait. Find her - find her first. 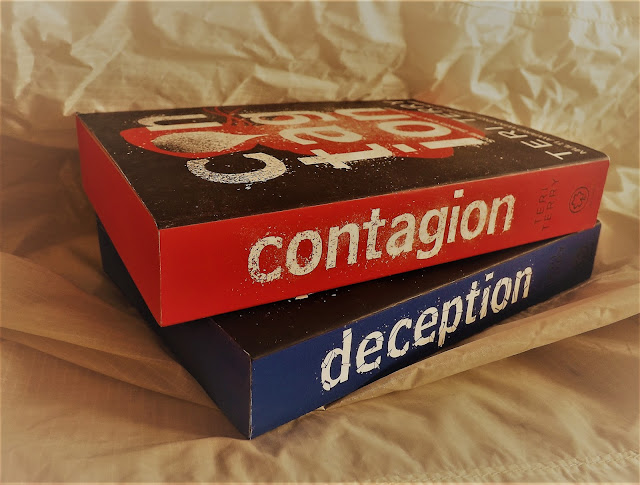 I had very little idea what to expect from Contagion when I started it. The back cover synopsis doesn't give much away. But Teri Terry is on one of the panels at the Northern YA Literary Festival in March, so I decided to give one of her books a try. Also, it looks absolutely stunning, with the sprayed red edges matching the spine and the awesome font on that spine. I always judge my books by their covers and this looked gorgeous. It looks even better when combined with the second book in the trilogy, Deception, with its velvety blue tones and fractured glass font. I can't wait to see what the third book looks like! I'm hoping for yellow, as it's the third primary colour, but I'm guessing on green.
It turns out that judging a book by its cover is a good idea, because the book is brilliant. It starts with Callie, in a very unpleasant laboratory, and it is shocking right from the start. We then shift to Shay, a teenage girl who appears to be living a fairly ordinary life in Scotland, dealing with some rather unpleasant local creeps.
Throughout Contagion, each chapter shifts point of view character between Shay and Callie. For a lot of the novel they are following very different plot lines, which gradually converge until we're seeing the same events from two different viewpoints. Many of the chapters are very short too, some of them only half a page. These two writing techniques combine to give the story a real pace, it just never seems to slow down from the start. Deception largely continues this practice, adding Kai in as a third point of view character.
Callie was my favourite character throughout. A young girl, she is full of bitterness and is often very mean and petty, but somehow she never failed to be a sympathetic character for me. I also liked Shay a lot, and seeing the interactions and rivalry between Callie and Shay was very interesting. Kai suffers somewhat in comparison, partly because we don't get to see inside his head in Contagion, and partly because he just felt a bit too earnest and righteous, compared to the contrasting light and shade in Callie's personality.
Apparently Teri Terry has a scientific background, and the science in both novels felt realistic enough to be believable, though I'm no expert myself. There was nothing there I didn't feel comfortable with accepting, which is good enough for this reader. While there is a lot of deep science, it never dominates the story and I didn't feel like not being able to fully understand the theory behind it got in the way of me enjoying it at all.
There's also definitely a lot of mystery to these books, from the very start. Some of it I was able to guess at before the characters figured it out, some of it I'm waiting for book three to reveal.
Also, it is lovely to see my home town of Newcastle being used as a setting to a novel!
Contagion was my favourite, but Deception definitely didn't disappoint. I'm giving them a combined score of four and a half moons.
🌕🌕🌕🌕🌗
Contagion and Deception are both out now, published by Orchard.
The final part of the trilogy, Evolution, is expected in August 2018.
Teri Terry will be appearing at NYALitFest. I've posted details of this festival here.