Zinnie and her sisters live in the murky tunnels beneath Edinburgh's Old Town. They keep out of the way of the authorities and remain undetected. Until, that is, rumours of a ghost bring unwanted visitors into the caverns they call home. Among them, a young Arthur Conan Doyle, keen to investigate, and MacDuff, the shady owner of Edinburgh's newest attraction, the House of Wonders.

Caught up in a world of intrigue and adventure, Zinnie seeks answers. But how can she discover what secrets lie in the House of Wonders while also protecting the sisters she holds so dear?


Welcome back to the BookWormHole. Today I am thrilled to be joined by one of my favourite authors, Sharon Gosling, author of The Golden Butterfly, Fir, countless other books and this, one of the best books I've read all year, The House of Hidden Wonders. You can check out my review here but today Sharon will be telling us about something that plays a key part in her new novel, the Victorian craze for spiritualism.


Spiritualism – the idea that it was possible to communicate with the spirits of the dead – had been around before the reign of Queen Victoria, but it was in the mid-to-late 1800s that belief in the supernatural as a contactable reality really became popular. It wasn’t just the idea of speaking to the dead that became popular, either – the Victorians were fascinated by all sorts of ‘spiritual’ phenomena. Mediums were hired by those in polite society to hold séances after dinner, while others performed on stage to crowded music halls, where they also performed hypnotism and other forms of ‘mesmerism’.

Darwin’s Origin of Species was the culmination of a trend towards challenging religion and specifically a belief in god as the great creator of all things. Darwin’s explanation of evolution provided a scientific basis for looking at the world – and once people had learned of it, Victorian society became fascinated by science in all its forms. Literature still existing from the time shows that there were as many advertisements for public scientific experiments as there were for dances, plays and other entertainments. Audiences flocked to see demonstrations of electricity, new medical equipment and advances in photography. Spiritualism was seen by many as another pure science – for surely, if it were possible to make light from darkness without the need for a candle, if it were possible to capture a fleeting moment as an image that would last forever, then it could also be possible to talk to the dead if only the correct scientific method were found?

It was stage magicians of the period who stepped forward to challenge the idea of spiritualism as a science. After all, they could see through many of the ploys used by so-called spirit mediums because they used the same methods themselves to create their illusions. Many became avid de-bunkers of those who claimed they could talk to the dead. This included Harry Houdini, who, before his untimely death, was determined to expose as many fraudsters as he could. This led him into a public feud with Sir Arthur Conan Doyle, who was himself an staunch believer in the existence of spirit mediums.

In The House of Hidden Wonders, I explore a little of this side of Victorian life – Zinnie has first-hand knowledge of a medium calling herself ‘Madam Khartoubian’, and Conan Doyle is intrigued by the apparently real ghost lurking in the depths of Mary King’s Close. If you’d like to know more, look for a copy of Matthew L. Tompkins’s The Spectacle of Illusion: Magic, the Paranormal, and the Complicity of the Mind. It’s full of fascinating photographs and diagrams from the heyday of Victorian spiritualism.

Thank you, Sharon, for that fascinating look at the supernatural. I particularly like the idea of stage magicians being the ones who exposed the frauds of so-called magic.

The House of Hidden Wonders is out now, published by Little Tiger Group. If you want to see more Victorian stage magic I can also thoroughly recommend Sharon's novel, The Golden Butterfly. And for another take on spiritualism, try The Vanishing Trick by Jenni Spangler, out at the end of April.

And don't forget to follow the rest of the blog tour! 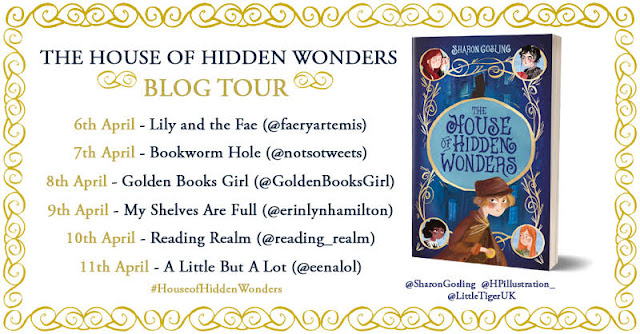