Hello, today I have two reviews for you, both part of a fairly new middle-grade fantasy series by Harriet Whitehorn.

The Company of Eight 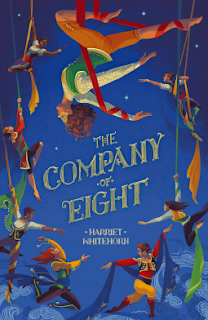 Harriet Whitehorn has created a really interesting world here, with strings of islands spread out across a sea. I loved the frozen landscape of the main island, with everyone zipping around on ice skates, and the names of the different places throughout the book are just brilliant.

It felt like a fully-thought out, functioning world too. I really liked the idea of the governor of the islands living and working on a ship that travels from place to place, it made so much sense and yet was such an interesting and different idea. The circus ship too, feels like just how a travelling circus would operate in a world like this one.

I really liked Cass's journey as a character, and the way she finds out more about herself, her past and what she's capable of as she travels the seas.

I'm always a big fan of circuses in books, and the circus ship is a nice addition to this. I was expecting it to feature more heavily, purely judging by the book's cover, but while it played a key role the story is more one of spies and adventure and intrigue.


The Conspiracy of Magic


The Conspiracy of Magic follows on from The Company of Eight, taking the story and its characters in a totally new direction. 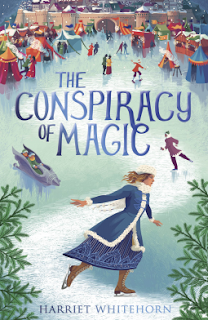 Where most of the first book was set at sea, on a collection of fascinating ships and islands, this one is pretty much landlocked. We head north into new territories, of dark forests and castles. There's a beautiful queen on a diplomatic mission and Cass is there to keep her safe.

I love the political slant to this book, it's not something I've seen used very often in middle grade fiction though it's a staple of adult fantasy, and it worked very well here. There's plenty of intrigue, betrayal and twists to keep things very exciting.

It was also really interesting to see more of the magic of this world, and I particularly liked seeing how Cass, who is immune to magic, reacted to magical tricks and illusions being used against her party.

The adventure roars along, the peril feels very real at times and there was plenty of intrigue to keep me fully gripped by this excellent book.


I was gifted eProof copies of both books via Netgalley.co.uk in return for honest reviews.

Both of these books are available now, published by Little Tiger Press.