The Umbrella Mouse by Anna Fargher 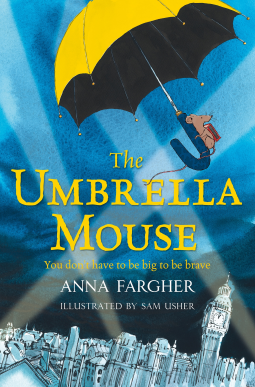 Young mouse, Pip Hanway's safe and quiet world is turned upside down when her home, James Smith & Sons umbrella shop, is destroyed by a bomb.

Orphaned and alone, she must begin a perilous quest to find a new home. But the only way to get there is by joining Noah's Ark, a secret gang of animals fighting the resistance in France, operating beneath the feet of the human soldiers.

Danger is everywhere and as the enemy closes in, Pip must risk everything to save her new friends.

The Umbrella Mouse an exciting espionage thriller set towards the end of the Second World War, after D Day and during the Blitz. It is a story about a young girl who is orphaned and left homeless and alone after her home and family are destroyed by a German bomb. But she has one destination in mind, somewhere her parents told her about where she has family and could find a new home. Trying to get there across war-torn Europe, she joins a resistance cell working in occupied France and helps them to fight back against the Nazis behind enemy lines, sabotaging supply lines and planning daring escapes. It is packed full of exciting wartime drama, serious peril and a fantastic crew of resistance fighters both in occupied France and back in London. There are creepy villains, sneaky spies and brave heroes. It's everything you would want from a children's book based in this period.

The fact that the girl is a mouse and the resistance is led by a hedgehog, with an array of different birds and beasts just adds another magical layer to a brilliant MG novel, with so much heart and emotion in it.

The animal characters work well though, and each has a unique set of talents and abilities that are used very effectively in the story telling. It also lightens what would otherwise be quite a heavy story.

The illustrations by Sam Usher are quite charming and really fit the feel of the story.

I really enjoyed Pip's adventures, and I'm giving The Umbrella Mouse four and a quarter moons.

The Umbrella Mouse is published by MacMillan and is available now. I was given an e-proof from Netgalley in return for an honest review.